Naomi Campbell was spotted donning a full-fledged hazmat suit, face mask and a pair of latex gloves at an airport. 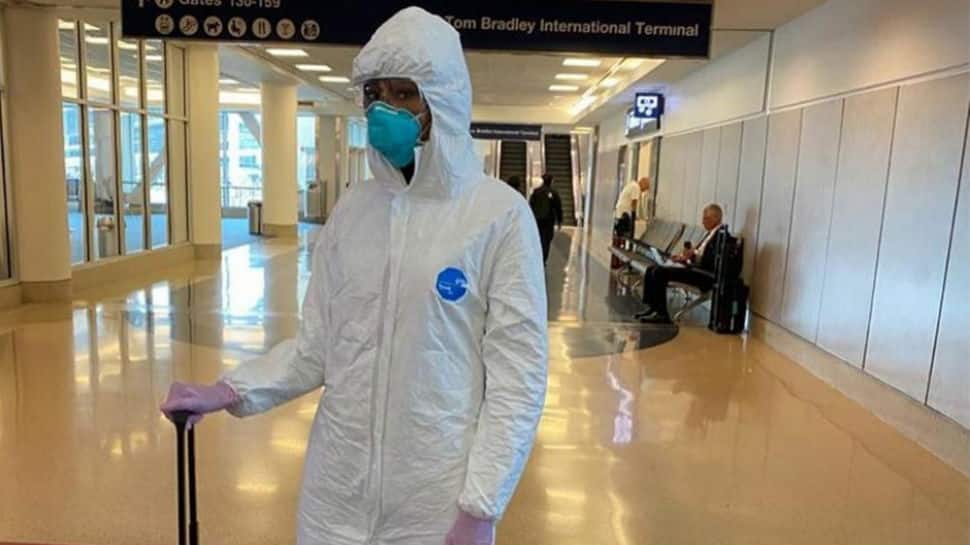 Washington DC: Supermodel Naomi Campbell seems to be too meticulous about her hygiene protocol for dodging the highly contagious coronavirus.

As evident from a series of sneaky snapshots, the 49-year-old celeb was spotted donning a full-fledged hazmat suit, face mask and a pair of latex gloves at an airport, reported Page Six.

Safety First NEXT LEVEL. Thank you @lindaevangelista Full video coming on my YouTube soon… All bought on @Amazon 6 weeks ago

Safety first. All bought on @amazon 6 weeks ago

At the time the pictures were taken, Campbell was about to board a flight from Los Angeles to New York City.

The celeb is already known to be a massive germophobe. So this new antic of hers doesn`t come as a total surprise. Just last year, she briefed her complete aeroplane hygiene routine on her YouTube channel.

Campbell went on to post her pictures wearing the strange attire on her official Instagram page with the caption: "Safety First NEXT LEVEL. Thank you @lindaevangelista Full video coming on my YouTube soon".

Later, the supermodel explained that she wasn`t doing it for laughs.

After the photos of her extreme precautions went viral, Campbell released a six-minute YouTube video, in which she explained why she went so over the top.

Campbell said: "It`s not a funny time, it`s not a humorous time, I`m not doing this for laughs. This is how I feel comfortable travelling if I have to travel; I`m trying to keep it to a minimum."

Naomi also mentioned that she has been wearing a mask on flights since the `90s and has been sanitizing her seat for 17 years. "Back in the day, people used to really laugh at me and speak under by breath ... and now I`m not ridiculous," she said.

However, these are not the only precaution the model takes, revealing she also takes several immune-boosting supplements, including two Vitamin C packets and papaya concentrate before she goes inside the airport.

She later criticized the TSA staff workers for not wearing gloves while handling passports and said that the flight attendants also did not wear gloves.

Campbell concluded the video by stressing that the public should not respond to the pandemic with fear.