Bollywood actor Kangana Ranaut, on Monday shared a series of pictures on social media, feeling the romantic vibes in Europe on the sets of her upcoming film Razneesh Ghai's 'Dhaakad'. 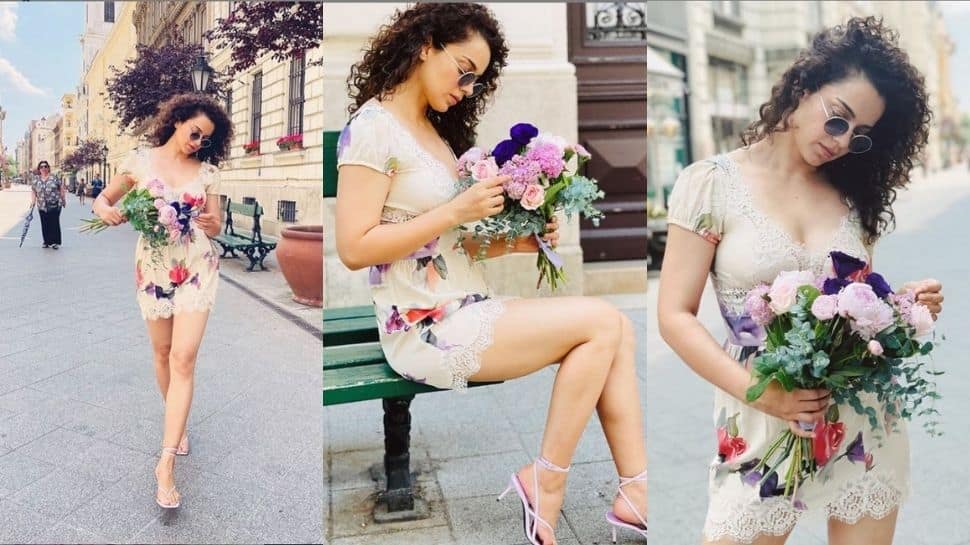 New Delhi: Bollywood actor Kangana Ranaut, on Monday shared a series of pictures on social media, feeling the romantic vibes in Europe on the sets of her upcoming film Razneesh Ghai's 'Dhaakad'.

Taking to her Instagram, the actor decided to pose aesthetically for a dreamy photoshoot for which she specifically purchased a bouquet of flowers. The actor served major romantic feels and decided to don a new avatar for her recent photoshoot.

In the series of pictures uploaded by the 34-year-old actor, Kangana donned a floral midi dress with a pair of sunglasses while on the sets of 'Dhaakad' in Budapest.

She posed around the blocks of Hungary and decided to play the 'Bolly Bimbo' to shoot the typical Instargam type photos for her fans. Captioning them, she wrote, 'Decided to play a Bolly Bimbo today and shoot typical insta style pics for my highly intelligent insta family.'

In another post, the actor could be seen walking around the city in flats. She informed her fans that she purchased a bouquet of colourful flowers for the purpose of the photoshoot and to get her 'Insta game right'.

She wrote, 'Bought these flowers to get my insta game right .... Might be a fatal blow on my self respect but my vanity is gloating...'. Not shying away from admiring her own beauty, the actor captioned another post writing, 'No really it's nice to be here and clicking these self-indulgent pictures.

Meanwhile, Kangana's upcoming movie projects include 'Thalaivi', which is based on the life of Tamil Nadu's former chief minister, Jayalalithaa. She also has 'Tejas' and 'Dhaakad' in her kitty. 'Manikarnika Returns: The Legend Of Didda' is also in the pipeline.