The 'Manikarnika' has made another fashion statement in white. Take a look at her pictures here. 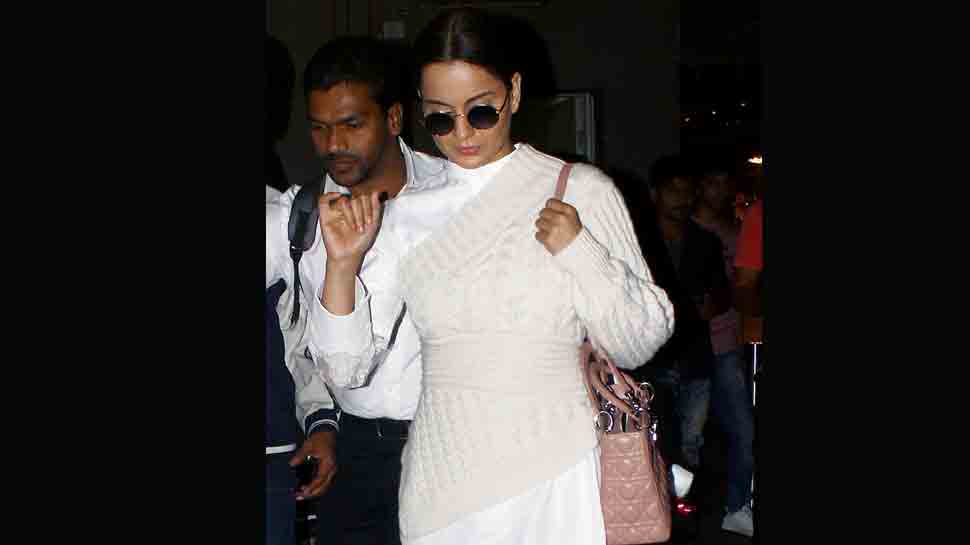 New Delhi: The immensely talented Bollywood actress Kangana Ranaut is a stunner in every sense of the word. The 'Queen' of B-Town is also famous for her out-of-box fashion choices. She has always been experimental about her look and doesn't really shy away from taking the risk and trying out something edgy.

Kangana, who has lately been snapped mostly in sarees and suits, ditched her traditional wear to try out something edgy. This time her look brought back the early 50s and 60s memory.

The actress was recently spotted at the airport, looking like a vision in white. She wore a white knee-length outfit from burberry with an off-shoulder pullover and teamed it up with brown shoes and her favourite pink handbag. The Jimmy Choo shoes that she wore with the outfit were extremely stylish. She rounded off her look with pink Dior handbag and sunnies.

It is to be noted that Kangana is known for her love for brands and we give her full marks for pulling off her latest airport look so well.

On the work front, Kangana will next be seen in 'Manikarnika: The Queen Of Jhansi'. The actress. The epic tale is based on the life of Rani Laxmibai of Jhansi. Kangana plays the titular role of Rani Laxmibai in her next and the story revolves around her war against the British East India Company during the Indian Rebellion of 1857. The film has been directed by Krish.

She will also pair up with Rajkummar Rao in psychological thriller 'Mental Hai Kya'.  It has been backed by Balaji Motion Pictures.

Hardik Pandya's ex Elli Avram blasts him on his sexist comments, asks 'is it something to brag about?'