She shared a lengthy blog post addressing the recent rumour that her husband cheated on her with their nanny, Carly Wilson. 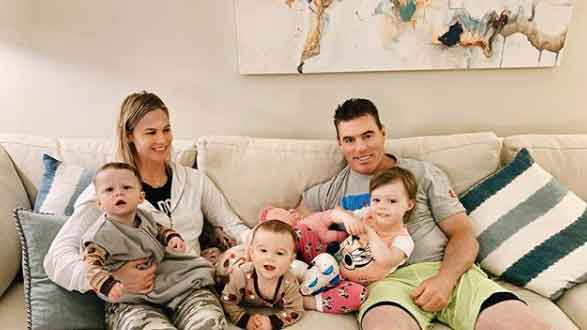 She shared a lengthy blog post addressing the recent rumour that her husband cheated on her with their nanny, Carly Wilson.

Last week, Jim filed for divorce, a day after their fifth wedding anniversary. A source had said the pair got into an argument and the police were called, confirmed Us Weekly.

Meghan began by discussing her pain over Jim's alleged sexting scandal in June, when he accepted that he was "engaged in an inappropriate conversation" and exchanged "lewd photos" with another woman -- not the nanny -- but denied having a physical relationship with her, reported People magazine.

"Out of respect for my children and my family, I find it unnecessary to go into all the gritty details. What I will say is that, in the wake of the sexting situation, my husband was drinking and partying with much younger women, including several of our babysitters, and I found this galavanting inappropriate, immature, and downright odd," she wrote."While I initially wrote it off because, during several of these outings, his 22-year-old daughter was present, given his previous indiscretions, I was uncomfortable," she continued. "

Even more so when he started lying about where he was going or who he was going with--and deleting entire text conversations on his phone with several of these young women. (For the record, after the sexting affair he had agreed with our therapist that he would be totally transparent and never delete messages or conversations and he would also keep his location available on his phone.)

"The 'The Real Housewives of Orange County' star then referred to a widely circulated picture of her husband along with the nanny while attending a hockey game together."And when I learned of a particular outing with a babysitter, this time, to a hockey game, that Jim repeatedly lied about, I asked him to include me on all future texts with this sitter but he said, 'No.' Another major red flag," she explained.

"To be clear, I don't know if Jim slept with our babysitter or whether they were just being exceedingly inappropriate by hanging out socially without either of them telling me (and Jim expressly lying to me about it). I've gone back and forth with my thoughts for a couple of days but as I write this, I don't think he did. But I still don't understand why he'd lie. And why would she lie?"

According to People magazine, King Edmonds said that she mostly grieves for the couple`s young children: twin sons Hayes and Hart, 16 months, and daughter Aspen, 3 next month."I am broken for my family. I am buried in despair. I cry at the drop of a hat. But I am enduring. I will set an example for my children and I will teach them to love and respect people while also knowing how to condone unethical or wrong behavior. I will facilitate healthy,consistent, and ongoing relationships with their father and with his family despite the hurt I feel from them because my children should not reap the karma of my personal situations." she wrote.