Pulkit Samrat and Kriti Kharbanda will be seen together in Anees Bazmee's 'Pagalpanti' and reportedly grew fond of each other while shooting for the film.

New Delhi: Bollywood actors Pulkit Samrat and Kriti Kharbanda's dating rumours have been doing rounds for quite some time now. Ever since Mumbai Mirror reported that the two actors are in a relationship, their personal lives are under the scanner.

Now, the 'Fukrey' actor's birthday post for Kriti has further added fuel to the rumours of them being a couple.

Kriti, who turned a year older on October 29, had the sweetest reply on the post. She wrote, “Hahahaha! There’s a reason I say you’re the best! Thank u so much! Time to do the happy dance dressed as minions! Only you’ll get that! u forgot mono deal contests, and crazy #shallowgoals !! Again only you know what I mean!”

"Thanks a ton handsomest!!! U da best!!", she added in another comment. 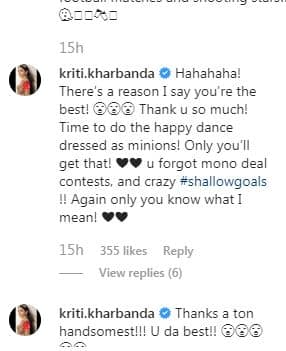 The two will be seen together in Anees Bazmee's 'Pagalpanti' and reportedly grew fond of each other while shooting for the film.

'Pagalpanti' isn't the duo's first film together. They have earlier worked together in the 2018 film 'Veerey Ki Wedding' helmed by Ashu Trikha.