In honour of Sridevi’s birth anniversary, let’s take a look at her 5 best looks in a saree 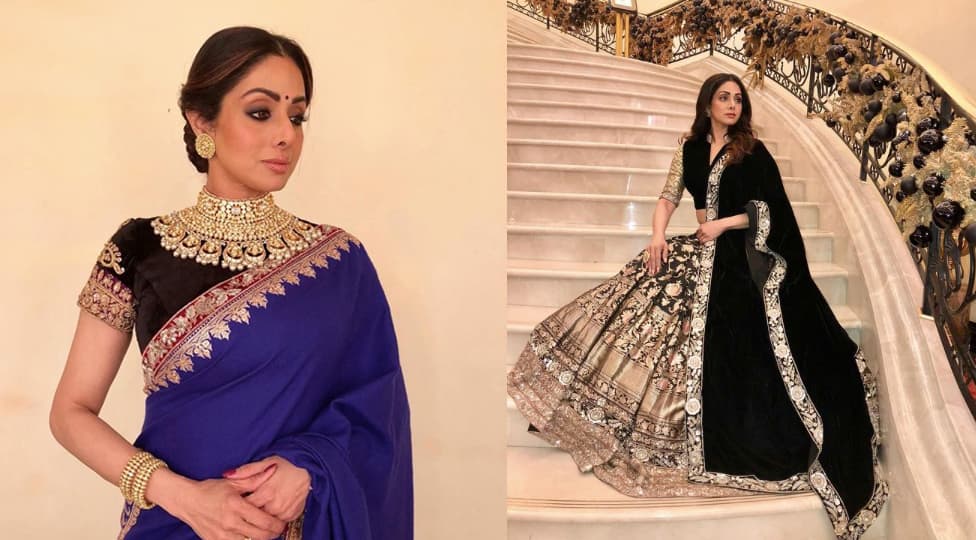 Sridevi, the first female superstar of Indian cinema worked in Telugu, Tamil, Hindi, Malayalam and Kannada language films. She was honoured with Padma Sri and several other accolades in her bright movie career.

The actress was found dead at a Dubai hotel on February 24, 2018, leaving behind her grieving family, friends and fans. She was 54.

Sridevi made her debut in Bollywood film at the age of 9 for ‘Rani Mera Naam’ (1972) and ever since there was no looking back. From ‘Solva Savan’, ‘Himmatwala’ to ‘Lamhe’, ‘Chadni’, ‘Nagin’, ‘Sadma’, ‘Khuda Ghawa’, ‘Mr India’ and ‘Judai’ etc, Sridevi ruled the hearts of her fans.

She was also awarded the National Film award for Best Actress for highly successful comedy-drama ‘English Vinglish’ and ‘Mom’. Along with her profound career, her fans were also crazy about her ethnic looks.

In honour of Sridevi’s birth anniversary, let’s take a look at her 5 best looks in a saree:

In the first look she dons Manish Malhotra’s purple saree with a statement neckpiece by gems and Jewels Palace. Looking stunning.

In the second look she is wearing a Sabyasachi’s beige net embroidered saree, with big statement earrings by Sri Hari Diagems and a sleek bun.

In the third photo, we see her wearing another stunning piece from Manish Malhotra, paired with green coloured kundan worked jewellery.

In the next look she is wearing a contemporary designed saree which is again by Manish Malhotra. It is a black and white striped saree with yellow embellishments.

In the final photo we see her in an amazing half printed, embroidered saree by Sabyasachi, It is a multicoloured floral saree, which he has paired with stunning earrings by Sunita Kapoor.

You are missed, Sri!