Sridevi-Boney Kapoor's family tree: All you need to know

Veteran actress and Padma Shree awardee Sridevi, who had an illustrious career spanning over four decades, left the entire film industry and her fans in a state of shock with her sudden death. 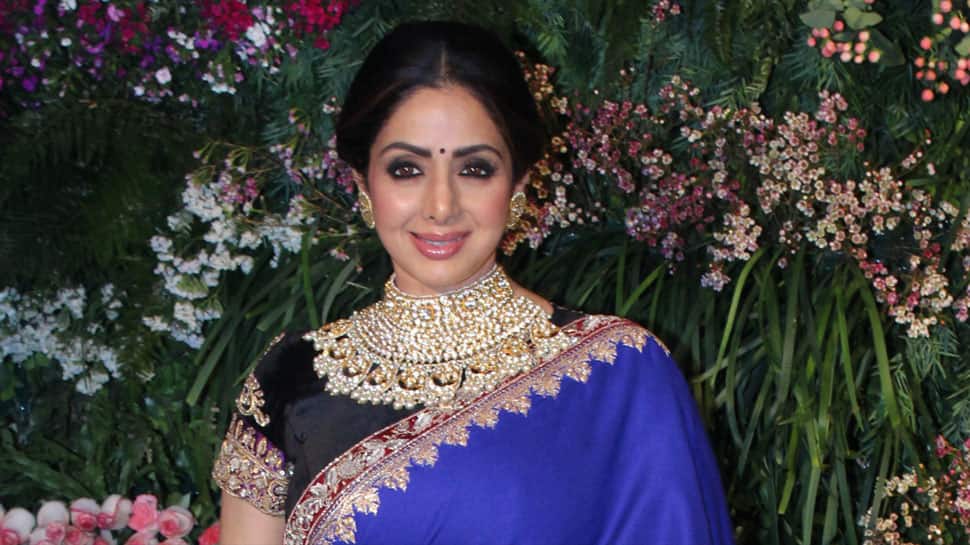 New Delhi: Veteran actress and Padma Shri awardee Sridevi, who had an illustrious career spanning over four decades, left the entire film industry and her fans in a state of shock with her sudden death.

Her mortal remains reached Mumbai around 10.30 pm on Tuesday from Dubai in a private plane. Her body was then taken to her husband Boney Kapoor's Lokhandwala residence. Today, her mortal remains will be taken to Celebration Sports Club Garden No 5, Lokhandwala Complex, Andheri West and from around 9.30 am to 12 noon, people will be allowed to pay their last respects.

Her final journey will begin at 2 pm from Celebration Sports Club to Pawan Hans, and the last rites will be performed at the Vile Parle Seva Samaj Crematorium and Hindu Cemetery around 3.30 pm. Fans gathered outside her residence to pay their last respects.

She was born as Shree Amma Yanger Ayyapan in her hometown Sivakasi in Tamil Nadu on 13 August 1963 to Tamil father Ayyapan and Telugu mother Rajeswari. Her father was a lawyer. She has a sister and two stepbrothers

Sridevi was married to Boney Kapoor, a film producer and is survived by two daughters—Janhvi and Khushi.

Have a look at the family tree of the veteran Bollywood actress:

Sridevi, originally named Shree Amma Yanger Ayyapan, was born to Tamil father Ayyapan Yanger and Telugu mother Rajeswari Yanger. While her father was a lawyer, her mother was a homemaker. She had two sibling - sister Srilatha Yanger and brother Satish Yanger.

In June 1996, Sridevi married Boney Kapoor, a film producer who is also the elder brother of actor Anil Kapoor and actor-turned-producer Sanjay Kapoor and sister Reema Kapoor. They have two daughters, Janhvi and Khushi.

Boney Kapoor was previously married to Mona Shourie and has two children from his first marriage - Arjun Kapoor and daughter Anshula. Mona was the CEO of Future Studios and had successfully produced several television shows like 'Hera Pheri', 'Yug', 'Wilayatee Babu' among several others.

Boney's brother Anil Kapoor is a successful film actor and producer. He is the second of four children. He is married to Sunita Bhavnani Kapoor, a costume designer with whom he has two daughters - Sonam Kapoor, Rhea Kapoor and son Harshvardhan Kapoor.

Actor-turned-producer Sanjay Kapoor is the founder and director of Sanjay Kapoor Entertainment Private Limited company with his wife Maheep Sandhu. The debut movie produced by their production house was 'Tevar' starring Arjun Kapoor and Sonakshi Sinha. He has a daughter named Shanaya Kapoor and a son Jahaan Kapoor.

Sridevi's sister-in-law Reena Kapoor, a fashion designer, is married to Sandeep Marwah of Marwah Films and Video Studios. He is the founder of Noida Film City. They have two sons Mohit and Akshay. Mohit made his acting debut with 'Fugly' in 2014. He recently got married to his girlfriend Antara Motiwala in UAE, that was also attended by Sridevi.

Sridevi's untimely demise sent a shock wave across the nation. "Boney Kapoor, Jhanvi, Khushi and the entire Kapoor, Ayyappan and Marwah family is deeply bereaved and shocked with the untimely loss of Sridevi Kapoor," the statement, issued by the Yash Raj Films (YRF) on behalf of the family, had said on Sunday.

"They thank the entire media for their prayers, support and sensitivity during their time of grief. Late Sridevi Kapoor's body will arrive in India on Monday, it had added.