The entire process of the star dying will take several thousand years and then the left-over material will cool and finally form a white dwarf, which is what becomes of Sun-like stars after their nuclear fuel is exhausted.

In a series of breathtakingly beautiful photos, NASA/European Space Agency/(ESA) Hubble Space Telescope has in the last few days captured photos of two dying stars. The photos show one Sun-like star dying in the Centaurus and Gemini constellations each.

"This image from the NASA/ESA Hubble Space Telescope shows NGC 5307, a planetary nebula that lies about 10,000 light-years from Earth. It can be seen in the constellation Centaurus (the Centaur), which can be seen primarily in the southern hemisphere. A planetary nebula is the final stage of a Sun-like star. As such, planetary nebulas allow us a glimpse into the future of our own solar system. A star like our Sun will, at the end of its life, transform into a red giant. Stars are sustained by the nuclear fusion that occurs in their core, which creates energy. The nuclear fusion processes constantly try to rip the star apart. Only the gravity of the star prevents this from happening," said NASA and ESA in a statement on August 30.

"At the end of the red giant phase of a star, these forces become unbalanced. Without enough energy created by fusion, the core of the star collapses in on itself, while the surface layers are ejected outward. After that, all that remains of the star is what we see here: glowing outer layers surrounding a white dwarf star, the remnants of the red giant star’s core. This isn’t the end of this star’s evolution though — those outer layers are still moving and cooling. In just a few thousand years they will have dissipated, and all that will be left to see is the dimly glowing white dwarf," the statement added. 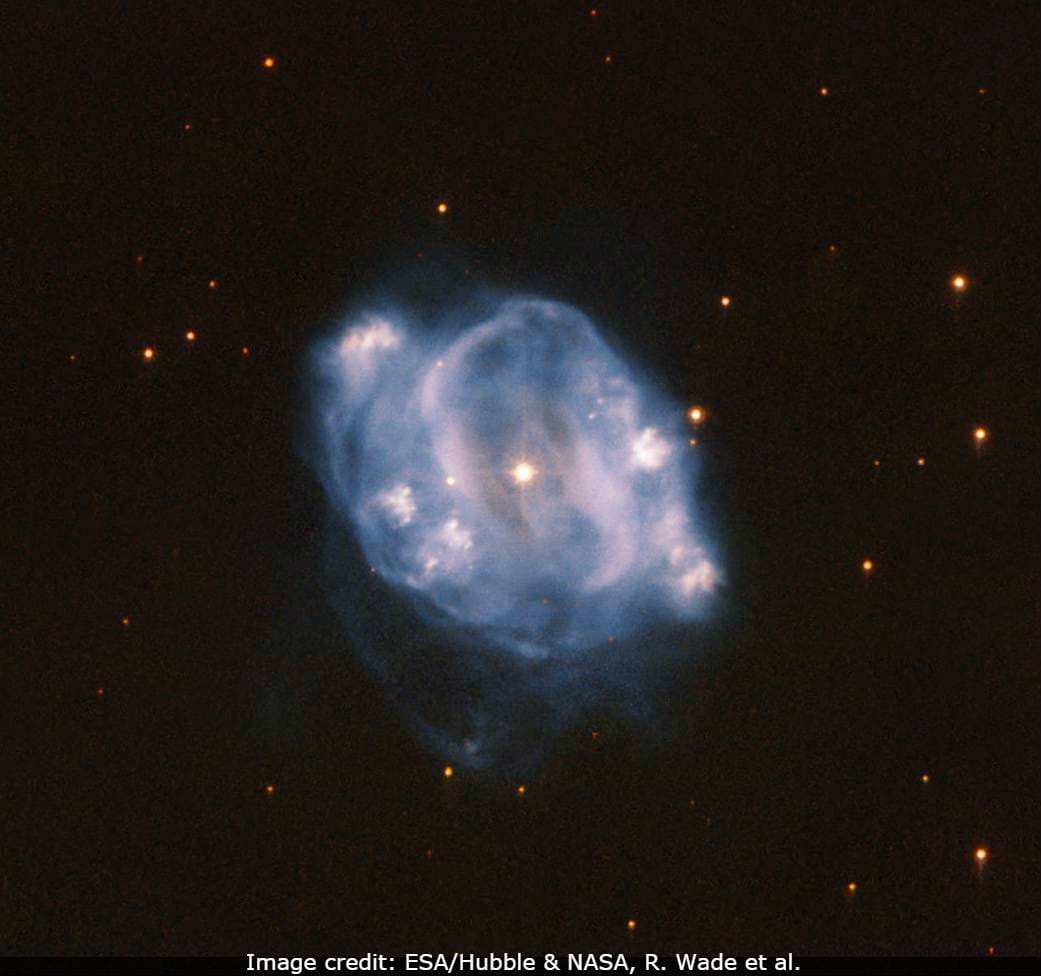 The entire process of the star dying will take several thousand years and then the left-over material will cool and finally form a white dwarf, which is what becomes of Sun-like stars after their nuclear fuel is exhausted.

In an earlier statement issued on August 23, 2019, the American space agency had said that Hubble Space Telescope had captured an image which initially managed to fool even the astronomers. But a careful study revealed that they were looking at a star in its last stage

"This atmospheric image taken with the NASA/ESA Hubble Space Telescope shows a dark, gloomy scene in the constellation of Gemini (the Twins). The subject of this image confused astronomers when it was first studied — rather than being classified as a single object, it was instead recorded as two objects, owing to its symmetrical lobed structure (known as NGC 2371 and NGC 2372, though sometimes referred to together as NGC 2371/2)," the statement read.

"These two lobes are visible to the lower left and upper right of the frame, and together form something known as a planetary nebula. Despite the name, such nebulas have nothing to do with planets; NGC 2371/2 formed when a Sun-like star reached the end of its life and blasted off its outer layers, shedding the constituent material and pushing it out into space to leave just a superheated stellar remnant behind. This remnant is visible as the bright star at the center of the frame, sitting neatly between the two lobes."

"The structure of this region is complex. It is filled with dense knots of gas, fast-moving jets that appear to be changing direction over time, and expanding clouds of material streaming outwards on diametrically opposite sides of the remnant star. Patches of this scene glow brightly as the remnant star emits energetic radiation that excites the gas within these regions, causing it to light up. This scene will continue to change over the next few thousand years. Eventually, the knotty lobes will dissipate completely, and the remnant star will cool and dim to form a white dwarf."