Sahithi Pingali, a class 12 student from Bangalore’s Inventure Academy, joins an elite group of people having their names named after stars in the Milky Way Galaxy. 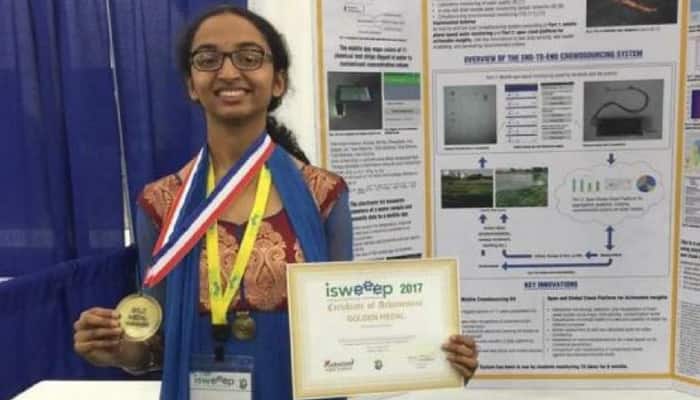 New Delhi: Her novel work on improving water quality has not just earned her the prestigious international science award, but made her immortal by engraving her name up in the night sky.

Sahithi Pingali, a class 12 student from Bangaluru’s Inventure Academy, joins an elite group of people having their names named after stars in the Milky Way Galaxy.

Sahithi reached the stars after she shined at the Intel International Science and Engineering Fair (Intel ISEF) held in Los Angeles, earlier this month.

She won the Gold Medal for her research on 'An Innovative Crowdsourcing Approach to Monitoring Freshwater Bodies' which was based on city lakes.

The Lincoln Laboratory of the Massachusetts Institute of Technology (MIT), which owns the right to name minor planets, decided to name a planet after her.

At the INTEL ISEF international finals, the 16-year-old won three special awards out of 21 awards won by the Indian contingent. She was also awarded “overall second place” in the Earth and Environment Sciences category.

“I definitely didn’t see this coming. I was expecting one special award at most. I haven’t yet digested the fact that I have a planet named after me,” she was quoted as saying to The Hindu.

Sahithi is currently interning at the University of Michigan, working in collaboration with PhD students and professors in the Civil and Environmental Engineering Department.

Earlier this month, her work on Varthur Lake has already earned her a Gold Medal at the International Sustainable World Engineering Energy Environment Project (ISWEEEP) Olympiad held at Houston in the US.