This event comes just days after the rare super blue blood moon that took place on January 31 and is also the second solar eclipse in six months. 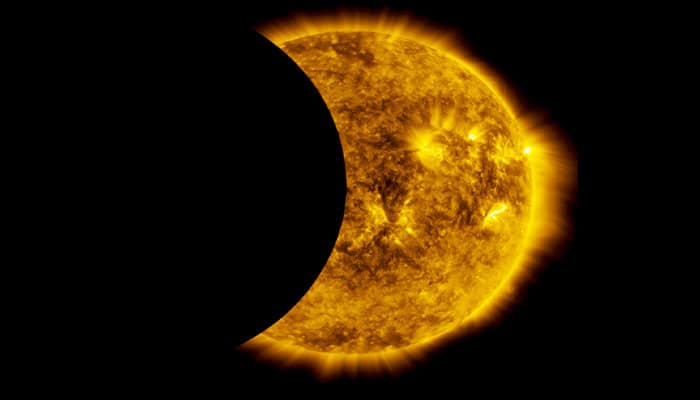 New Delhi: On Thursday, February 15, sky-gazers will be treated to a gorgeous celestial event, when the moon will block a portion of the sun, leading to a partial solar eclipse.

This event comes just days after the rare super blue blood moon that took place on January 31 and is also the second solar eclipse in six months.

While it won't be as remarkable as the August 21, 2017, total solar eclipse, spectators and enthusiasts will be able to note a slight change in the shape of the sun.

What is a partial solar eclipse?

A partial solar eclipse happens when the moon only blocks a portion of the sun. This can happen only at new moon when the sun and the moon are in conjunction as seen from Earth in an alignment referred to as syzygy.

Where will the eclipse be visible?

What time can we view the partial solar eclipse?

Antarctica will experience the partial eclipse between about 8:00 pm and 9:00 pm UTC or 9:00 am local time. Then, the end of the eclipse will be visible in Uruguay, Argentina, southern Chile, far western Paraguay, and far southern Brazil.

How to view the eclipse?

According to the guidelines set by NASA, one should avoid looking at the sun directly/with the naked eye. Pinhole cameras or the filtering eclipse glasses should be used.

2018 will witness two more partial solar eclipses which are expected for July 13 and August 11 respectively. On July 13, the Sun would appear crescent-shaped over Australia and Antarctica, while the August 11 will play over the North Pole, northern Europe, and parts of northern and eastern Asia.