Researchers including those from European Southern Observatory (ESO), produced the images as a demonstration of ALMA’s ability to study solar activity at longer wavelengths of light than are typically available to solar observatories on Earth. 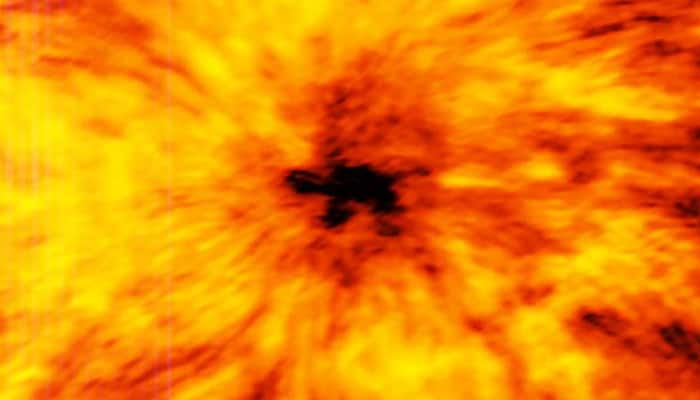 New Delhi: In a significant findings, scientists have discovered a new view of the dark - contorted centre of a sunspot that is nearly twice the diameter of the Earth.

Scientists also uncovered other invisible details of our Sun. The results are an important expansion of the range of observations that can be used to probe the physics of our nearest star.

The result of this work is a series of images from the Atacama Large Millimeter/Submillimeter Array (ALMA) in Chile. These images are part of the testing and verification campaign to make ALMA's solar observing capabilities available to the international astronomical community.

Researchers including those from European Southern Observatory (ESO), produced the images as a demonstration of ALMA’s ability to study solar activity at longer wavelengths of light than are typically available to solar observatories on Earth.

The ALMA antennas had been carefully designed so they could image the Sun without being damaged by the intense heat of the focussed light.

Astronomers have harnessed ALMA’s capabilities to image the millimetre-wavelength light emitted by the Sun’s chromosphere - the region that lies just above the photosphere, which forms the visible surface of the Sun.

They have studied the Sun and probed its dynamic surface and energetic atmosphere in many ways through the centuries.

However, to achieve a fuller understanding, astronomers need to study it across the entire electromagnetic spectrum, including the millimetre and submillimetre portion that ALMA can observe.

Since the Sun is many billions of times brighter than the faint objects ALMA typically observes, the ALMA antennas were specially designed to allow them to image the Sun in exquisite detail using the technique of radio interferometry and avoid damage from the intense heat of the focussed sunlight.

The team observed an enormous sunspot at wavelengths of 1.25 millimetres and 3 millimetres using two of ALMA’s receiver bands. The images reveal differences in temperature between parts of the Sun’s chromosphere. The difference in appearance between the two images is due to the different wavelengths of emitted light being observed. Observations at shorter wavelengths are able to probe deeper into the Sun, meaning the 1.25 millimetre images show a layer of the chromosphere that is deeper, and therefore closer to the photosphere, than those made at a wavelength of three millimetres.

ALMA, which is designed principally to observe remarkably faint objects throughout the Universe - such as distant galaxies and planet-forming disks around young stars - is also capable of studying objects in our own Solar System, including planets, comets, and now our own Sun.

International Space Station – When, where and how to spot ISS