India needed just eight runs from the final over and they should have have won the match with set batsmen Rahul and captain Mahendra Singh Dhoni in full flow. 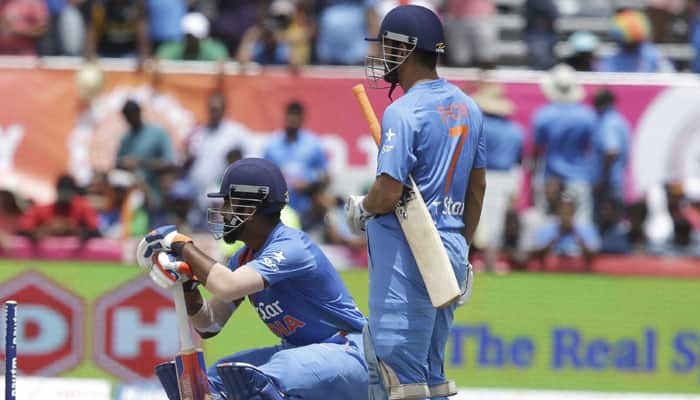 Fort Lauderdale, US: India almost pulled of the highest ever successful run chase in T20 Internationals with Lokesh Rahul smashing his maiden hundred but fell short by just one run in a nerve-wrecking last ball finish to lose the first of the two T20 match against the West Indies here today.

Rahul, who was included in the playing eleven ahead of Shikhar Dhawan, hit 110 not out from 51 balls with the help of 12 fours and five sixes and India were on the verge of chasing down West Indies' mammoth 245 for 6.

India needed just eight runs from the final over and they should have have won the match with set batsmen Rahul and captain Mahendra Singh Dhoni in full flow.

India needed two runs from the final ball to win the match but Dhoni failed to get those runs as he was caught by Marlon Samuels, slicing a slower delivery off Dwayne Bravo to the heartbreak of the large number of Indian supporters at the stands. India ended the run chase at 244 for 4 from 20 overs.

India thus failed to pull off the highest ever successful run chase which still stands at 236 for 6 which the West Indies pulled off against South Africa in January last year in Johannesburg.

Dhoni's men, however, had the consolation of knocking off the highest ever T20I second innings score which is also the same 236 for 6 which the West Indies made against South Africa.

24-year-old Rahul, who was dropped on 36 by Andre Russell, became the third Indian to hit a century -- and the highest scorer -- in T20 Internationals after Suresh Raina and Rohit Sharma.

Playing in his fourth T20I, Rahul reached to his 100 in 46 balls, the joint second fastest in T20 Internationals along with South African Faf du Plessis and just one ball short of South African Richard Levi's fastest 45-ball hundred against New Zealand in 2012 in Hamilton.

The match, the first international outing for India in United States, was in fact a competition of show of batting prowess between the two teams on a featherbed of a pitch on a small ground at Lauderhill and Dhoni's men came second at the end.

This was the highest ever T20 International score against India by any team, surpassing the 219 for 4 by South Africa in Johannesburg in March 2012.

The way the West Indians were hammering the Indian bowlers, it seemed that Dhoni's decision to insert the opposition in backfired but his boys were up to the task and they were on the verge of turning the match on its head with a vintage batting performance only to fall short by just one run.

Indian run chase began with Rohit Sharma (62 from 28 balls) hitting three fours off Samuel Badree to take 14 runs from the second over. But, Rahane (7), who was asked to open the innings with Rohit instead of Rahul, departed in the third over with Bravo taking a sensational catch near the boundary line.

Bravo dived to his left and managed to pull off an absolute stunner inches from the ground.

Test captain Virat Kohli (16 from 9 balls) came out and hit two fours off Badree immediately but he was not to be the saviour of the Indian team this time as he fell in the fifth over. Bravo cramped Kohli for room with a short ball and the ball kissed the glove as Fletcher completed an excellent catch down leg side.

India were 51 for 2 after five overs.

Off-spinner Sunil Narine was kept for special treatment by both Rohit and Rahul as India kept themselves in the hunt.

Rahul hit Narine for a six and two fours to take 16 runs from the sixth over while Rohit hit two sixes to steal the same 16 runs off the eighth over as the Indians scored at 12 runs an over to reach 100 in 8.3 overs.

Rohit reached to his 50 as he hoisted Kieron Pollard for a six in the 10th over after facing 22 balls as India were 116 for 2 at the halfway stage.

India were going strong with Rohit and Rahul getting the runs and keeping the asking rate within reach. Rahul reached to his 50 from 26 balls but Rohit left him in the 12th over as he failed to clear the field in the aerial route and Pollard took a simple catch near the ropes.

Dhoni came out and with Rahul going great, he played the second fiddle as India reached 182 for 3 at the end of 15 overs, needing 64 runs from the final five overs to win the match.

India got 11 runs from the 16th over and then reached 200 in 16.2 overs. They eased up the run chase with Dhoni hitting two sixes and Rahul following up with one maximum as the Indians took 20 runs from the 17th over off Andre Russell. India needed 33 runs from the final three overs to win the match.

India took nine runs from the 18th over and 16 from the penultimate over with Rahul reaching to his hundred with a six off Russell. That left India with just eight runs from the final over. That task looked easy for Dhoni and Rahul but in the end it was not to be with both not being able to hit a boundary from the final six deliveries.

The second and final T20 International will be played at the same venue tomorrow.

Earlier, a hapless Indian bowlers were mercilessly hammered for a record 21 sixes as the West Indies posted the third highest ever T20 International innings score of 245 for 6 in a sensational batting display by the Caribbeans.

Indian captain Dhoni's decision to insert the opposition seemed to have backfired as the West Indies batsmen rained 13 fours and 21 sixes on a flat pitch at Lauderhill ground. None of the Indian bowlers came out unscathed as they were butchered by the batting pyrotechnics of the world champions.

The earlier highest number of sixes in an innings was 19 hit by Netherlands against Ireland in 2014.

Today's 245 for 6 was the third highest innings total behind 260/6 scored by Sri Lanka against Kenya in 2007 and 248/6 by Australia against England in 2013. This was the highest ever T20 International score against India by any team, surpassing the 219 for 4 by South Africa in Johannesburg in March 2012.

Lewis also hit the fifth fastest hundred as he reached the milestone in just 48 balls.

At one time, it looked like the West Indians would run away with the highest ever T20 International score as they reached 199 for 1 at the end of 15 overs but India made fine a comeback in the final five overs, conceding just 46 runs and taking five wickets in the process.

Except for Ravichandran Ashwin (0/36), all the other five bowlers went for more than 10 runs an over. Ravindra Jadeja and Jasprit Bumrah got two wickets each while conceding 39 (from 3 overs) and 47 runs (from 4 overs) respectively.

The beginning was ominous for India as Mohammed Shami gave away 17 runs in the first over itself with Charles smashing him for a six and two boundaries. Shami was taken off and Bumrah was introduced in the third over.

The West Indies continued to score at a brisk pace with Bhuvneshwar Kumar conceding 20 runs in his first two overs. Bumrah was also taken to task with Lewis hoisting him for two sixes and a four to amass 18 runs from the fifth over.

The Caribbeans reached to their 50 in just 4.1 overs and the Indians were left to bring in Ashwin into the attack in the sixth over.