Dortmund are tied on 12 points with Bayern Munich, who take on Hamburg SV on Saturday. 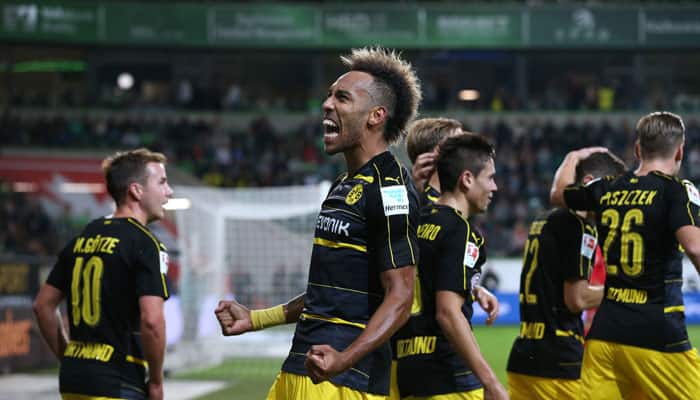 Berlin: Title contenders Borussia Dortmund twice hit the woodwork as they beat Freiburg 3-1 to join leaders Bayern Munich at the top of the Bundesliga.

Dortmund, who have now scored 14 goals in their last three league games, should have killed off the match long before Freiburg pulled a goal back on the hour to set up a nervous finale.

However, strikes from Pierre-Emerick Aubameyang and Lukasz Piszczek and a stoppage time goal from Raphael Guerreiro allowed Dortmund to secure a fourth win in five league games and equal a club record of 24 home games without defeat.

Dortmund are tied on 12 points with Bayern Munich, who take on Hamburg SV on Saturday.

"After a weak opening 15 minutes, we played an outstanding first half where we should have led by more goals," said Dortmund coach Thomas Tuchel, whose team had scored five or more goals in their previous three matches in all competitions. (READ: I'm the worst manager in the history of football, says Jose Mourinho)

"It then became tight and we were nervous. But it`s great to have pulled it off, especially after three big wins in a row."

With Dortmund hosting Real Madrid in the Champions League next week, he added: "This performance comes at just the right time."

Aubameyang should have done better when he was sent through with a superb Matthias Ginter pass but the Gabon international`s clever chip sailed just wide of the post on 18 minutes.

Emre Mor came even closer when his effort bounced off the crossbar minutes later as Dortmund upped the pressure in a lopsided first half.

Their overwhelming dominance finally paid off on the stroke of halftime with Aubameyang sliding in to meet an Ousmane Dembele cutback at the far post for his fifth goal this season.

Piszczek added another goal eight minutes after the restart with Freiburg firmly boxed into their own half and enduring wave after wave of attacks.

But when Freiburg scored against the run of play, with Max Philipp cutting the deficit on the hour, Dortmund were kept on tenterhooks as Aubameyang again hit the woodwork.

Guerreiro made sure of the three points with his stoppage time goal.

I'm the worst manager in the history of football, says Jose Mourinho