Havelange, who has died during the Olympic Games being staged in his home city of Rio de Janeiro, oversaw a transformation of FIFA and its flagship World Cup competition into a multi-million dollar enterprise. 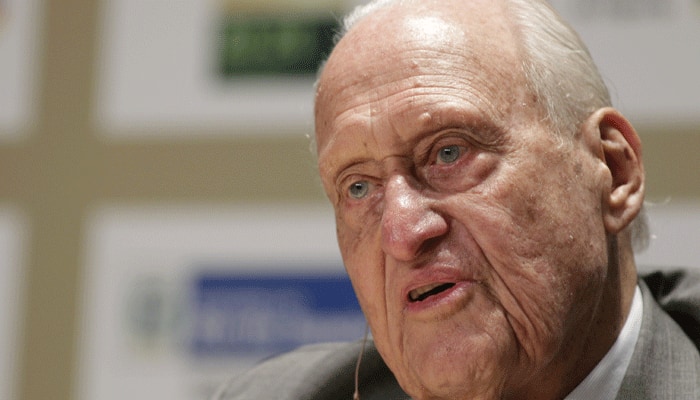 Rio de Janeiro: Joao Havelange, head of soccer`s ruling body FIFA from 1974 to 1998 and a former member of the International Olympic Committee (IOC), died in a Rio de Janeiro hospital on Tuesday at the age of 100.

"During his 24 years as president ... football became truly global, reaching new territories and bringing the game to all corners of the world," current FIFA head Gianni Infantino said in a statement.

"Something the whole football community should be grateful for. I extend my condolences to his family."

Havelange, who has died during the Olympic Games being staged in his home city of Rio de Janeiro, oversaw a transformation of FIFA and its flagship World Cup competition into a multi-million dollar enterprise.

However, his reign was marred by allegations of corruption and he resigned as honorary president three years ago after a FIFA Ethics Committee report said he had taken bribes from the now-defunct sports marketing company ISL over an eight-year period.

Havelange, a former Olympic swimmer and water polo player for Brazil, has been in and out of hospital in recent months with respiratory problems.

Born to Belgian immigrants, he represented Brazil in the 400 and 1500 metres freestyle swimming events at the 1936 Games and played for his country`s water polo team 16 years later.

Havelange became the first non-European president of FIFA when he defeated Englishman Stanley Rous in an election in 1974.

Before that he was president of the Brazilian Football Confederation for 15 years during which time his country won the World Cup three times.

Havelange`s resignation came just days before an IOC ethics hearing over his links with ISL.

Rio Games spokesman Mario Andrada said on Tuesday: "Our thoughts and prayers are with his family and Brazilian flags will be kept at half-mast".

The Estadio Joao Havelange venue in Rio, where many Olympic events are being staged, was named in his honour.