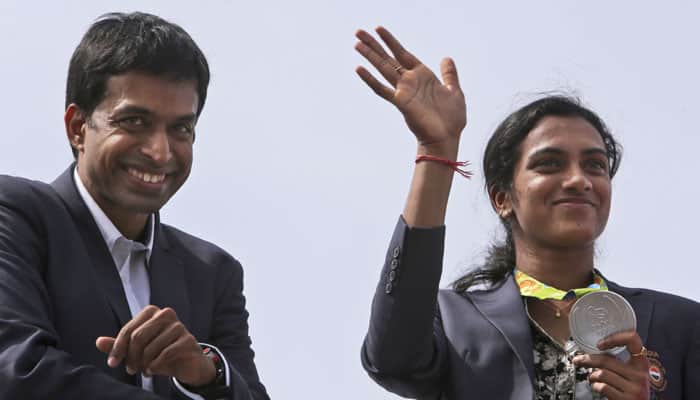 Hyderabad: Ace Indian shuttler PV Sindhu arrived to a rousing reception in Hyderabad today. The 21-year-old, who became the first Indian shuttler to win a Silver medal at Olympics was felicitated at Gachibowli stadium today.

Here is all it how happened: 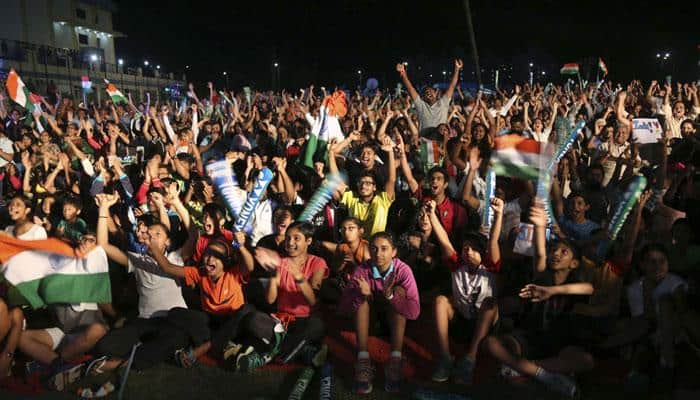 01:32 pm - Pullela Gopichand too thanks the Telangana government. He also thanks Sakshi Malik and Sindhu for winning two medals and saving some pride for the country at the biggest sporting extravaganza.

01:30 pm - I am really very thankful to everything, says PV Sindhu.

12: 56 pm - Both Sindhu and Gopichand are meeting several dignitaries at the moment.

12: 49 pm - The spotlight is now on Sindhu and Gopichand who are seated on the stage. There is no end to the number of bouquets which will be handed over to these two today.

12: 46 pm - Sindhu has now reached the stage where dignitaries are waiting for her.

12: 44 pm - Sindhu is now in a jeep where she is taking a victory parade along with Gopichand.

12: 42 pm - The stadium is jam-packed. Remember, it's not a weekend. Thousands have turned up at the Gachibowli stadium to welcome Sindhu and Gopichand.

12: 39 pm - Sindhu is taking a victory parade now inside the stadium. Huge moment in Indian sports. Not often do we see such an incredible welcome for a badminton player.

12: 38 pm - The moment has arrived! Sindhu has arrived at the Gachibowli stadium.

12: 25 pm: On her way to the final match, Sindhu defeated World No. 2 Wang Yihan from China as well as World No. 6 Nozomi Okuhara from Japan.

12: 10 pm - Thousands of fans are chanting Sindhu's name at the moment in Gachibowling stadium. The crowd is waiting for Sindhu's arrival.

11: 55 am - Prior to Sindhu, Saina Nehwal had won a bronze medal at London Olympics. This year however, she was knocked out early in the tournament. Saina was suffering from a knee injury and she also underwent a surgery after arriving in India.

11: 45 am - As a result of her historic feat, Sindhu is all set to get richer by Rs 13 crore. Various organisations have come forward to reward the 21-year-old with cash.

11: 30 am - Sindhu has been following a strict diet on Gopichand's instructions. Now that she has made the country proud, she said she was planning to feast on some Hyderabadi Biryani.

11: 20 am - The artists have been practicing their act at the Gachibowli stadium, where Sindhu is supposed to arrive in a while.

11: 10 am - The procession has got a little slower as the bus has entered the main city. While there were specific instructions to avoid traffic jams, it is close to impossible to stop the fans from cheering for her local superstar.

11: 00 am - Fans have been throwing plenty of bouquets to Sindhu who is sharp enough to collect them all.

10: 55 am - Sindhu has made a lot of sacrifices for the historic Silver medal. While other athletes were bemoaning lack of access to Pokemon Go in the Olympic village, Sindhu had not been using her mobile phone for the last two to three months. She was also following a strict diet.

10: 40 am - Indian batting legend Sachin Tendulkar will also be handing over the keys of a swanky BMW to Sindhu on August 28. (Read full story HERE)

10: 25 am - Meanwhile, preparations are in full swing at the Gachibowli stadium where fans are anxiously waiting for their fan to arrive.

10: 15 am - After the felicitation ceremony, a press conference has also been organised where Sindhu and Gopichand will interact with the reporters.

10: 10 am - Sindhu became the first Indian shuttler to advance into the final of an Olympic event.

10: 06 am - As the bus moves towards Gachibowli, hundreds of school kids, fans are waving the tricolour towards Sindhu.

10: 00 am - Greater Hyderabad Municipal Corporation (GHMC) has made big arrangements for Sindhu's welcome.

09: 56 am - While the bus is moving towards Gachibowli, the stadium is jam-packed with thousands of fans who are waiting to welcome her.

09: 52 am - PV Sindu's parents and even her sister is on the bus along with her. Gopichand, his wife and kid is also said to be on the bus. They all are waving towards the fans.

09: 48 am - Fans, ministers and plenty of other people welcomed Sindhu on this massive occasion.

09: 44 am - PV Sindhu and her coach got on the top of a bus which will take her to Gachibowli stadium. This a special bus which has been called from Mumbai for the special occasion.

09: 40 am - PV Sindhu has arrived at the airport. She was welcomed by several dignitaries who welcomed her with flowers and gifts.

The 21-year-old, who became the first Indian shuttler will be arriving in the city today, will be felicitated in the state along with coach Pullela Gopichand.

The felicitation ceremony will be held in Gachibowli stadium.

Several dignitaries and fans have gathered to welcome Sindhu, who has become the toast of the nation with her superlative show at the biggest sporting spectacle.