Khushbu Sundar vows to give befitting reply to Congress, claims there was 'no freedom to speak the truth'

Khushbu Sundar said, "I have joined the BJP because of the Tamil Nadu party president L Murugun." Sundar said the Congress dropped her from the post before she submitted her resignation letter to Congress` interim President Sonia Gandhi on October 12. 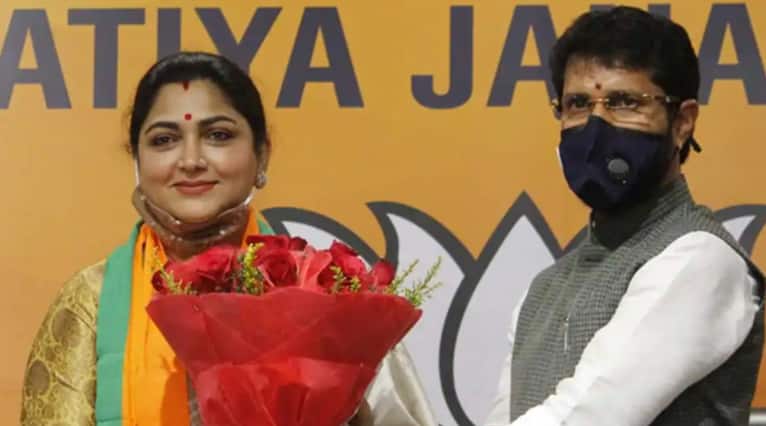 Chennai: Actor-turned-politician Khushbu Sundar on Tuesday (October 13) said that she wanted to give a befitting reply to Congress, claiming that she was insulted in the party and wondered how the grand old organisation could do good for the nation when there was "no freedom to speak the truth" within the party. She returned from Delhi to Chennai today.

Sundar told reporters at Chennai Airport, "I have joined the BJP because of the Tamil Nadu party president L Murugun," adding she was a prominent face of Congress and was also party spokesperson, but Congress dropped her from the post before she submitted her resignation letter to Congress` interim President Sonia Gandhi on October 12.

She said, "I have worked hard and when I come out they (Congress) are against me. I want to give a befitting reply to them."

Addressing her maiden press conference at the BJP's Tamil Nadu headquarters 'Kamalalayam' in Chennai, she said, "I was insulted (in Congress party) and not invited for party events. I used to get to know about programmes only after seeing newspapers."

A day after joining the Bharatiya Janata Party (BJP), Sundar said though Congress set in motion initiatives like the Goods and Services Tax while it was in power, it was keen on only finding faults, be it the tax reforms or the farm laws of the Centre just for the sake of opposing the saffron party.

Even while she was in Congress, the actor said to have welcomed the National Education Policy and abolition of the triple talaq.

Khushbu Sundar joined the BJP in Delhi on Monday after quitting Congress where she had been its national spokesperson for six years.

Pointing to leaders including Jyotiraditya Scindia quitting the Congress and the party "sidelining 23 leaders" who wrote to top leader Sonia Gandhi recently, she asked: "when there is no freedom to speak the truth within the party, how then could one expect it to do good for the country."

Khushbu Sundar, who is known for her views espousing the rights of women, said she continued to remain a "Periyarist" (follower of rationalist leader Periyar's ideology) as she would go on to champion the cause of women.

She said Periyar fought for the rights of women and oppressed people including Dalits and to be a Periyarist, there was no need to subscribe to all of his ideologies, seen as a reference to his commitment to atheism.