This is said to be the largest sculpture of the face of Lord Shiva on the planet. 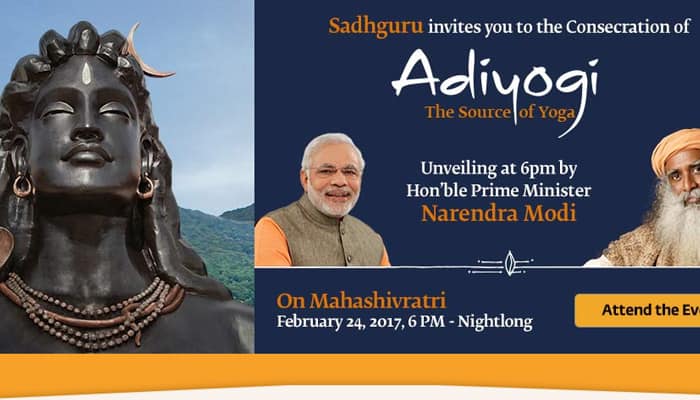 Coimbatore: On the occasion of Maha Shivaratri, Prime Minister Narendra Modi will on Friday unveil the 112-foot face of Lord Shiva or 'Adiyogi' in Coimbatore.

This is said to be the largest sculpture of the face of Lord Shiva on the planet.

The unveiling will take place at Isha Foundation at 6 pm today.

The founder of Isha Foundation is Sadhguru Jaggi Vasudev.

A five-tier security blanket has been put in place in and around the city and also Tamil Nadu-Kerala border in view of event.

With the venue being on the Western Ghats and also close to the mountain ranges in Kerala, additional police personnel would be deployed along the state borders to prevent possible infiltration of extremists and Maoists, police said.

The tight security was also being put in place in view of planned protests by human rights organisations, various political parties, farmers and tribal bodies, alleging that Adiyogi’s face was built on encroached land and that Modi’s visit would only regularise it (land).

In Chennai, the CPI(M) and CPI pointed to various alleged violations in setting up of the statue and said the Prime Minister should not visit the venue.

Modi is scheduled to arrive by 5.30 pm at Sulur airport near here and then leave for the venue by a helicopter.

In a statement, the foundation had on February 18 had said Isha Foundation said on Saturday that the face will be largest such on the planet, recognising the first yogi's unparalleled contribution to humanity.

"This iconic face symbolises liberation, representing the 112 ways in which one can attain the ultimate through the science of yoga," the statement had said.

According to the Foundation, on Maha Shivaratri, Modi will light the sacred fire to commence the 'Maha Yoga Yagna' across the world when one million people will take an oath to teach a simple form of yoga to at least 100 persons in the coming year.

"For the first time in the history of humanity, Adiyogi introduced the idea that the simple laws of nature are not permanent restrictions. If one is willing to strive, one can go beyond all limitations and attain liberation, moving humanity from assumed stagnation to conscious evolution," Isha Foundation founder Sadhguru Jaggi Vasudev had said in the statement.

Describing the significance of Adiyogi, Vasudev had said: "It is essential that the coming generations on this planet are seekers, not believers. As philosophies, ideology, belief systems that don't stand the test of logic and the scientific verification will naturally collapse in coming decades, you will see the longing for liberation will rise. When that longing rises, Adiyogi and the science of Yoga will become very important."