The event was telecasted live for viewers amidst intense suspense and excitement that is sure to have enthralled viewers of music and entertainment across Tamil Nadu. 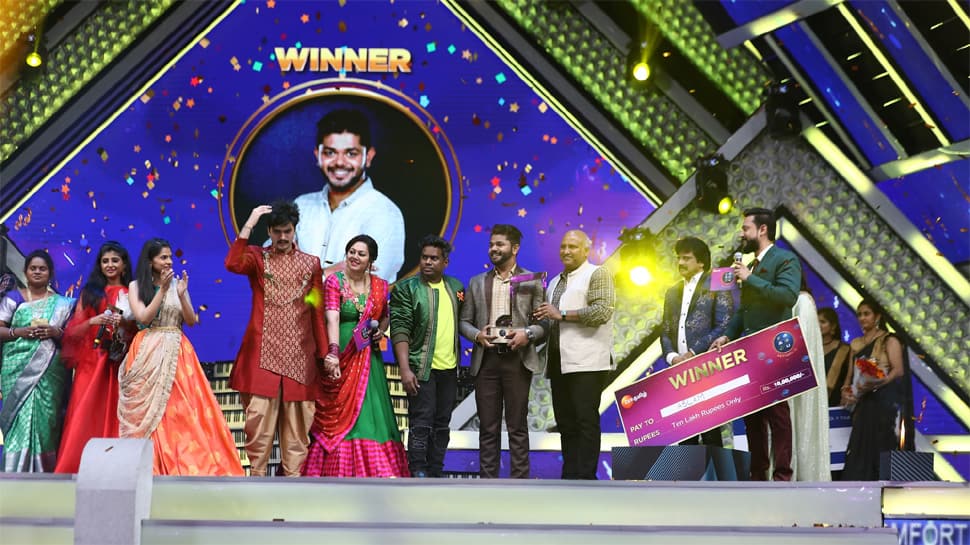 The event was telecasted live for viewers amidst intense suspense and excitement that is sure to have enthralled viewers of music and entertainment across Tamil Nadu.

From the inception of Sa Re Ga Ma Pa property in Tamil Entertainment space in October 2017, the show has transcended the boundaries of entertainment among the viewers with innovative themes that truly highlighted the mesmerising and melodious voices of the contestants who were handpicked after several rounds of auditions.

Since the premiere of Seniors Season 2, wherein over 20 contestants were shortlisted through blind-auditions with 100 jury members in attendance, the show has travelled a long way with the dedication and commitments of the talented contestants, leading to the grand finale with 5 finalists.

Apart from the show's judges – Srinivas and Sujatha, the grand finale also witnessed Yuvan Shankar Raja – the brand ambassador of Zee Tamil's Sa Re Ga Ma Pa as part of the judging panel. The special guests for the evening were Composer Devi Shri Prasad and Actor/Musician Andrea Jeremiah who also provided their constructive feedback and inputs with the finalists. The Grand Finale was hosted by high-spirited Archana Chandhoke and the charming Deepak Dinkar who added to the entertainment value of the show.

On winning the show – Aslam said, “My dream to make a mark in the music industry began over a decade ago, and since then, I have been in pursuit of the right platform to recognise and reward my talent. I am extremely grateful to the judges and the jury members for the role that they have played in moulding my talent that has led to my victory at Sa Re Ga Ma Pa. Despite being new to Tamil Nadu, I have been extremely overwhelmed by the love and affection that the Tamil Makkal have bestowed upon me and I look forward to presenting fresh and good music to them in the future”.

Watch The Fifth Estate on &PrivéHD