The actress performed the ceremony on their behalf ensuring they can stay connected with the actress and witness each and every moment of the Argh. 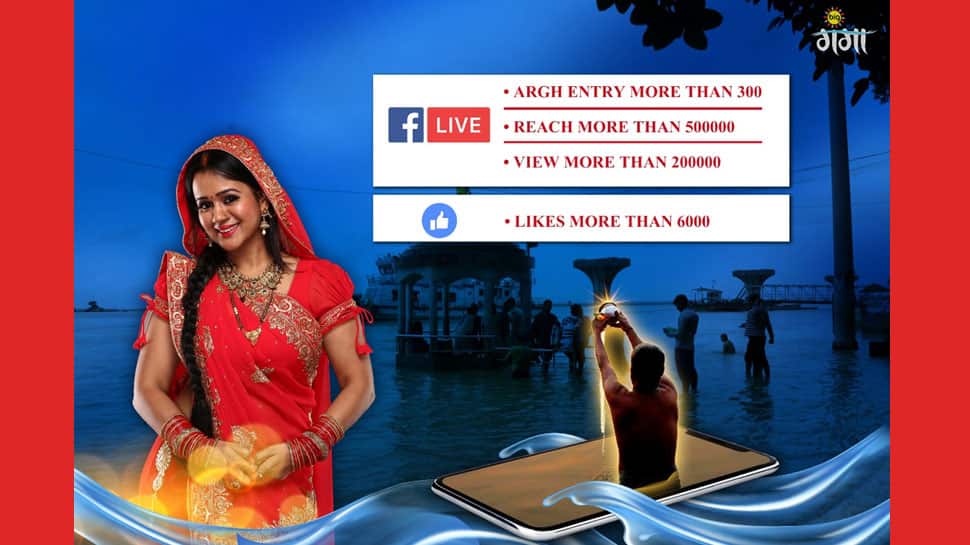 Big Ganga, Zee Entertainment Enterprise Limited's No. 1 Bhojpuri Channel, once again came to the fore by giving an unforgettable experience to its audience. The channel, through its unique initiative by extending the opportunity to perform “LIVE Argh” and “Ek Kadam Swabhiwan Ki Aor” took the Chhath Puja celebrations a notch higher by making it an extremely-memorable event for women, families and everyone else who are away from their hometown.

Big Ganga, while forming a special connect with its viewers, introduced a very unique initiative by roping in popular Bhojpuri actress Gunjan Pant to facilitate Argh (rituals) on behalf of the devotees who could not make it to their hometown via a FB Live on BIG Ganga's Facebook page. Through the LIVE Argh, viewers, who wanted to perform Argh, posted their wishes by logging onto Big Ganga's Facebook page.

The actress performed the ceremony on their behalf ensuring they can stay connected with the actress and witness each and every moment of the Argh. This real-time viewing option by BIG Ganga ensured that their viewers don't miss a second of the ritual performed by the actress and can have the gratification of their Argh being offered to Sun God at Ganga Ghat which is considered the most pious offering. Such was the frenzy and anticipation during the Argh that as per the FB LIVE data, there were 300 Aargh requests with the event posting a staggering reach of five lakh.

Not limiting it to just the digital platform, BIG Ganga, through 'Ek Kadam Swabhiwan Ki Aor', safeguarded the dignity of the women devotees by providing them a safe place to change. In order to ensure a safe experience for women devotees during Chhath Puja, the channel installed changing rooms across the Patna Ghat. The Chhath puja takes place near the Ganga ghats where women perform the rituals (Aarag) in the river.

With there being no basic changing facilities available for women in the past, the channel put its best foot forward towards making the entire devotional experience a pleasant one for the women devotees in attendance. There were as many as 100 changing rooms installed across prominent and crowded locations set on the ghats of Patna. With as many as two million devotees in attendance at the banks of the river Ganga, these changing rooms were a boon for the female population with as many as a lakh using these rooms to change their clothes.

Big Ganga's whole initiative not only provided women devotees with a safe surrounding, but made sure that it creates an opportunity for brands to reach out to their core target audience in large numbers. Keeping in line with the rituals, the channel distributed around 10,000 sindoor boxes to the women adding further joy to the celebrations. Along with them, the event witnessed prominent brands like Emami (Zandu), Goldie Masala, Bunge Dalda, Ultra Teach and Yamaha come forward.

Big Ganga has always been at the forefront of spearheading initiatives that strongly resonate with the masses and truly serve the people in the region. Big Ganga's 'LIVE Argh' and Ek Kadam Swabhiwan Ki Aor'   initiatives were an extension of its core values to continually deliver a quality experience to its audience both through riveting offerings and enthralling on-ground activities.

Continuing with its tradition of celebrating and elevating the pride of the region, Big Ganga soon will be bringing the International Bhojpuri Films Award onto its platform. This year Big Ganga is taking IBFA to Singapore to highlight the growing aura of Bhojpuri culture across the globe.