Directed by the comedian-turned-filmmaker Bo Burnham in his feature debut, the film stars young Elsie Fisher in the lead role as it opens your eyes to the other side of life through a teenager's lens. 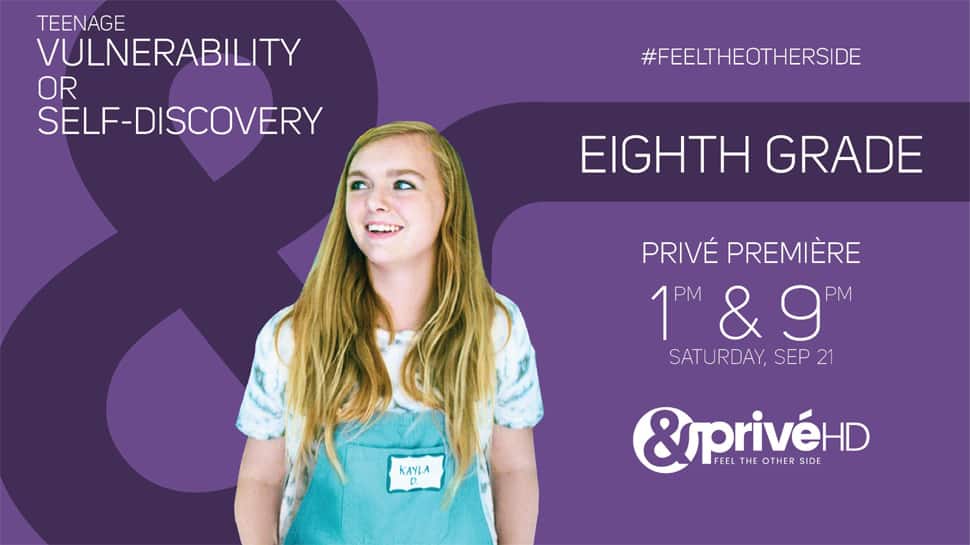 Is virtual truly the new reality? Does your social following define who you really are? In the age of digital dominance, witness a coming-of-age story about an eighth-grader who struggles with anxiety to make her presence felt. &PrivéHD is set to premiere the heart-warming tale of a teenager, stuck between her charming identity in the virtual world and self-doubting persona in the real world.

The premium destination for nuanced cinema will air the comedy-drama movie 'Eighth Grade' on Saturday, September 21, 2019, at 1PM and 9PM.

Directed by the comedian-turned-filmmaker Bo Burnham in his feature debut, the film stars young Elsie Fisher in the lead role as it opens your eyes to the other side of life through a teenager's lens. The film received numerous awards and nominations, including a Golden Globe nomination for Fisher and Writers Guild and Directors Guild of America Awards for Burnham.

The film revolves around the life of a thirteen-year-old girl Kayla (Elsie Fisher) who is nearing the end of middle school, with only a week left to complete eighth grade before she moves to high school. A shy and introverted Kayla grapples with being labelled as the 'most quiet' in her school. She soon takes to YouTube to express herself with motivational vlogs.

Coming from the Gen Z that thrives on digital – Kayla is one of the many who constantly suffer from anxiety and depression. The film portrays the teenager's encounters with her ignorant peers, her single father and her school crush as she finds her true identity and reignites her hopes and dreams together with love and laughter.

Will Kayla survive the storm of the Eighth Grade and eventually break out of her shell?

Walk down the path to self-discovery with young Kayla as Eighth Grade is all set to air on Saturday, September 21, 2019, at 1 PM & 9 PM only on &PrivéHD.