For stories that are meant to be savoured, &PriveHD innovates with Prive Episodes this Monday

For those who appreciate nuanced cinema, &PriveHD brings riveting and award-winning films that stimulate the minds and bring alive the other side of cinema with Zee Prime English HD Pack comprising - &PriveHD, Zee Cafe HD, &flix HD, LF HD is priced at Rs 25/-. 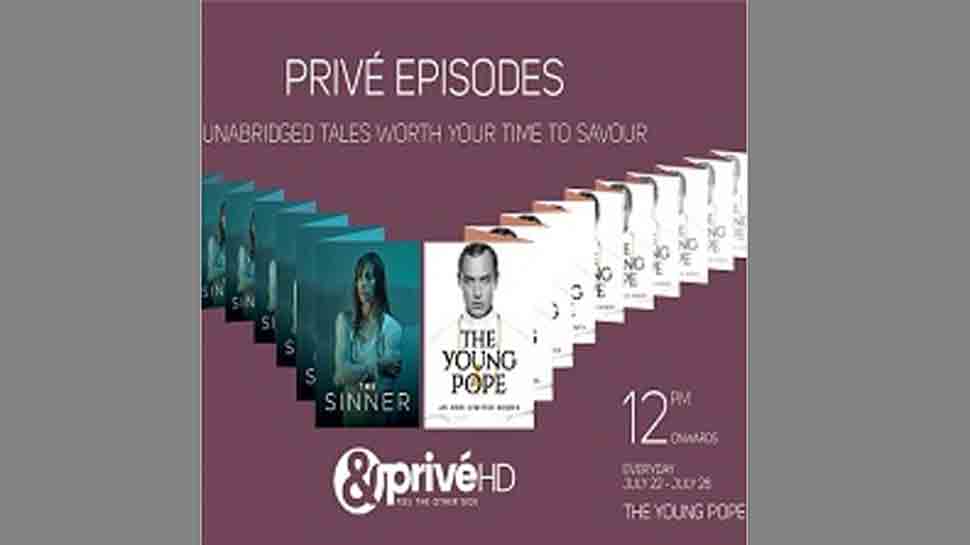 There are some stories that truly deserve a moment. A moment to feel the emotion, a moment to savour the story and a moment to live the journey of the protagonist, one chapter at a time. For such unabridged tales that continue to linger in your thoughts, &PrivéHD, the premium destination for nuanced cinema, is set to launch Privé Episodes starting Monday, July 15 from 12 PM onwards.

This new property features two gritty dramas namely The Sinner and The Young Pope in a week-long binge. Bohemian and bold, the two series boast of dark, complex and edgy events that each lead to a dramatic cliff-hanger. Reaching out to the cinephiles with these choicest dramas, Privé Episodes on &PrivéHD presents the series in a back-to-back week-long binge starting 12PM to 8PM allowing the viewer to choose their pace as they dwell on each new revelation.

Speaking about the launch, Shaurya Mehta, Business Head, Zee English Cluster, said, “&PrivéHD has always stood for handpicking some of the most critically-acclaimed and award-winning stories for our discerning audience. Over the past months, we have brought some of the most innovate blocks such as The Unchartered Side and Privé Unscripted, that perfectly resonated with our audience who are looking to experiment with their choice and are equally involved in their choice-making.”

“With content increasingly being the key driver for most people, our non-conformist viewers prefer those stories that allow them to explore the many layers and live the drama at a steady pace. We are extremely thrilled to innovate yet again with Privé Episodes that enables the viewer to pick their pace as they progress with each episode in a week-long binge. Both 'The Sinner' and 'The Young Pope' are truly unconventional and gripping plots and we are certain that these series will surely garner immense appreciation from our loyal audience,” he added.

Directed by Derek Simonds and starring Jessica Biel, The Sinner revolves around the life of Cora – a seemingly normal woman who leads a happy life with her family of three. On one fine day, as the family settles by the beach, in a rush of sudden inexplicable emotions, Cora is seen walking up to a complete stranger and stabbing a man to death in broad daylight. What follows is detective Dan's pursuit to uncover the real reason behind the gruesome murder. Having won multiple award nominations across awards such as Golden Globes, People's Choice Awards, Primetime Emmy Award, The Sinner is one show that met with immense acclaim and rave reviews from both critics and audience alike.

In one of his most striking performances, The Young Pope features Jude Law essay the role of the first American in history to become the pope. The series traces the journey of the newly elected Pope Pius XIII Lenny Belardo (Jude Law) a sinister man under the garb of a saint, who turns the world around under his reign. The series has won multiple award nominations across prestigious titles such as Golden Globes, Primetime Emmy Awards and Venice Film Festival.

For those who appreciate nuanced cinema, &PrivéHD brings riveting and award-winning films that stimulate the minds and bring alive the other side of cinema with Zee Prime English HD Pack comprising - &PrivéHD, Zee Café HD, &flix HD, LF HD is priced at Rs 25/-.

So, take your time to savour the story as &PrivéHD presents Privé Episodes starting Monday, July 15, 2019 only on &PrivéHD.