This Independence Day, be a part of Zee Cinema's #MainBhiKesari initiative

This story is depicted in the movie Kesari, starring Akshay Kumar and Parineeti Chopra. 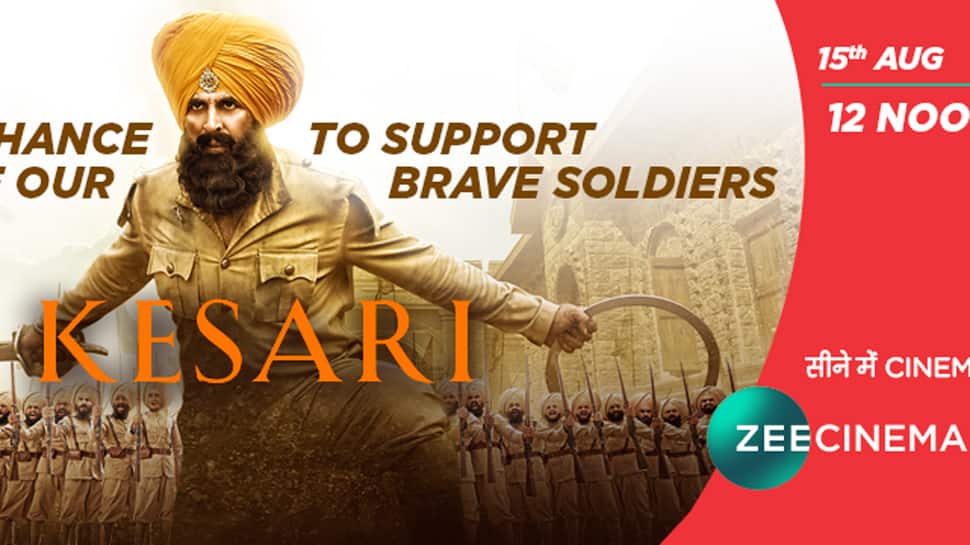 While we are all set to celebrate our 73rd Independence Day, let's not forget that the sole reason for us being able to celebrate this freedom is the sheer selflessness of our soldiers. The Indian armed forces battling it out on the borders are an epitome of bravery and sacrifice. One such instance of bravery was the Battle of Saragarhi, where 21 Sikh soldiers fought bravely against a mighty army of 10,000 Afghan invaders for their motherland and created history.

This story is depicted in the movie Kesari, starring Akshay Kumar and Parineeti Chopra. Kesari is all set for its World Television Premiere on Zee Cinema this 15th August at 12 noon. Zee Cinema has always believed that movies can inspire people to live a life that is purposeful and larger than life. This belief has translated into the brand's key messaging which is “Jab Jazba Hai Jeene Mein, Cinema Hai Seene Mein – Seene Mein Cinema, Zee Cinema”.

Paying an ode to every martyr, Zee Cinema urges citizens of India to come together and help the kin of martyrs through the #MainBhiKesari campaign. Starting 1st August, fans can extend their support by donating any amount on the Bharat Ke Veer app/website or through Freecharge and share a screenshot tagging Zee Cinema and using the hashtag #MainBhiKesari. For every donation made, the channel will contribute ₹500 towards Bharat Ke Veer.

Launched in April 2017 by Akshay Kumar and the Ministry of Home Affairs, the 'Bharat Ke Veer' initiative started with the purpose of enabling willing donors to help and contribute towards the families of soldiers who sacrificed his/her life in the line of duty.

Akshay Kumar, who launched the Bharat Ke Veer app in 2017 said, “Kesari depicts the iconic battle of Saragarhi that was fought in 1897, which is a prime example of bravery and sacrifice. Post any war or battle, it's the families of soldiers who suffer unimaginable loss. With Zee Cinema's #MainBhiKesari initiative we can go one step further from merely empathizing with them to supporting their families, wives, children and parents. Our soldiers put their lives at risk at the border for our safety, it is our responsibility now to go all out and support them. So, I urge all the viewers to step up and make a contribution towards our Bharat Ke Veer.”

Ruchir Tiwari, Business Head, Zee Hindi Movies Cluster said, “When Zee Cinema adopted Seene Mein Cinema as the brand philosophy, the aim was to ignite the 'Jazba' in every Indian and inspire them to go beyond the ordinary and achieve the unachievable. As industry pioneers, it is our constant effort to show movies that evoke an emotional connect and bring about a change in people's lives. With the #MainBhiKesari campaign, we are taking a step towards fulfilling our motto. With this initiative, we hope that we can bring people together as one community and make a difference in the lives of the armed forces and their kin.

Over the years it has been Zee Cinema's endeavour to take up social causes and work towards creating awareness. The channel also premieres movies with a social message and aims at highlighting a significant cause. Last year, for the World Television Premiere of Padman, the channel ran a tweet for a cause social media campaign #Padathon, which aimed at raising awareness about menstrual hygiene and creating a platform to start conversations about the topic. For every tweet uploaded with the hashtag, the channel contributed Rs.10 towards an NGO that made affordable sanitary pads. #ZeeForAll was another successful initiative undertaken by the channel in 2017 for the Independence Day Special movie – Dangal.  With an audio description for the visually impaired and subtitles for the hearing-impaired audience, the movie was made accessible to all.''

Here is how you can contribute to the initiative, supporting our selfless brave hearts:

This Independence Day, do your bit for our soldiers and also do not miss the World Television Premiere of Kesari on Thursday, 15th August, at 12 noon only on Zee Cinema!