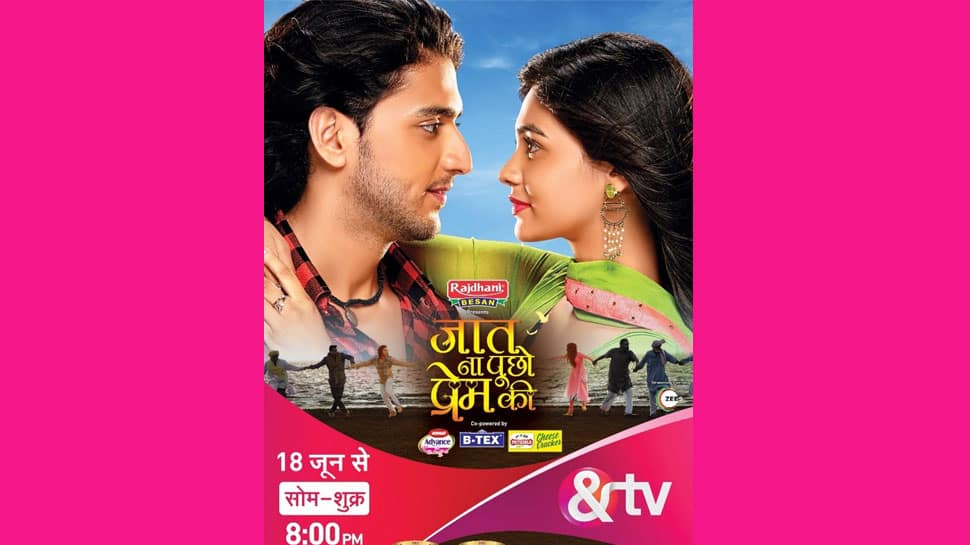 We divide ourselves amongst caste, creed, culture and countries but what remains undivided is love. It is all-encompassing and has surmounted various obstacles of age, gender, distance but has yet to breakdown the shackles of caste. A television adaptation of the blockbuster film Sairat, &TV is all set to present a new romantic social drama titled Jaat Na Poocho Prem Ki.

Unfolding against the rural backdrop of Eastern Uttar Pradesh, Jaat Na Poocho Prem Ki is a tale of forbidden love. It traces the journey of a young couple Badal and Suman belonging to different castes who fight for their love against the oppressive caste system prevalent in their society and family. Pursuing the hopes and struggles of these two lovers, the romantic drama attempts to gently highlight the harsh realities of casteism that continue to oppress lovers and people even today.

Commenting on bringing an adaptation of the popular film on the small screen, Vishnu Shankar, Business Head, &TV said, "The caste system is arguably the biggest bane of the Indian society, having divided our country for centuries. While there are changes to ensure caste discrimination is mitigated, the issue is still very much alive. Entertainment enjoys the power to present different perspectives and persuade mindsets. Which is why it is our endeavour and hope that by raising a conversation on this socio-cultural issue, we as a society move closer to a place where caste divide and discrimination do not exist. Sairat was an exceptional masterpiece of Indian cinema that endeavoured to stir conversation on this matter and we are proud to be the first ones to adapt this story on television as Jaat Na Poocho Prem Ki."

Talking about taking inspiration from the films and creating an adaptation, Producers Rajesh Ram, Cockcrow Entertainment and Pradeep Kumar, Shaika Telefilms said, "Sairat portrayed the harsh reality of caste with beauty and utmost realism which turned out to be an eye opener for many. We wanted that same message to reach out to the most interior parts of India, breaking the silence that has been maintained on this reality until now. Going forward with the similar bold thought, we decided to treat this love story a little differently. Adapting the story on television gives us a chance to add various layers to the characters which cannot be done in a three-hour film. Just like Sairat, we hope this show creates a difference in the mindset of society."

Speaking about essaying a diverse character on screen, television actor Kinshuk Vaidya said, "I feel overwhelmed to be a part of Jaat Na Poocho Prem Ki that has been adapted from a cinematic jewel-like Sairat. My character Badal is a simple young boy who has grown up dealing with the issue of caste difference all his life. But this grave reality is actualised when he falls in love with girl named Suman who belongs to a caste that is different from his. I am thankful to &TV and the producers for giving me this opportunity. I have always wished to bring a diversity in my roles, and I hope the viewers find this new character as interesting as I do."

"I urge my fans and viewers to please tune in to Jaat Na Poocho Prem Ki by subscribing to the Zee bouquet of channels as per the new TRAI mandate. After all, Zee is the No. 1 network for family entertainment, a one-stop-shop with programmes of interest for every member of the family. So, to continue enjoying our show on &TV, please buy the Zee Family Pack - Hindi SD/HD today by choosing the ZEE HSM Bouquet," he added.

Talking about making her debut on the small screen, Pranali Rathod said, "I couldn't have asked for a better start to my television journey than Jaat Na Poocho Prem Ki. I am so grateful to &TV and the producers for the same. My character Suman is a young, adventurous and modern girl who has grown up in luxury but believes in staying grounded with all the traditional values imbibed in her. She happens to fall in love with a boy who belongs to a different caste than the one she comes from. In spite of facing high family resistance, her love stays true and she is not afraid of the consequences they might face. They don't want to run away from the truth but want to fight to change the mindset of those around them."

The soulful title track of Sairat, Sairat Zaala Ji stirred millions of hearts with its melodious tunes and impactful orchestral touches originally composed by the duo Ajay- Atul. Jaat Na Poocho Prem Ki will present a Hindi rendition of this song that will serve as the show's title track sung by Yasser Desai and Aishwariya Pandit which will be available across music streaming platforms in India.

Watch this new love story unfold starting June 18th, every Monday to Friday at 08:00 PM only on &TV!