Produced and Directed by Goldie Behl, REJCTX is the story of the millennials and it delicately addresses various teen issues through a gang of friends who set out on a journey of self-discovery 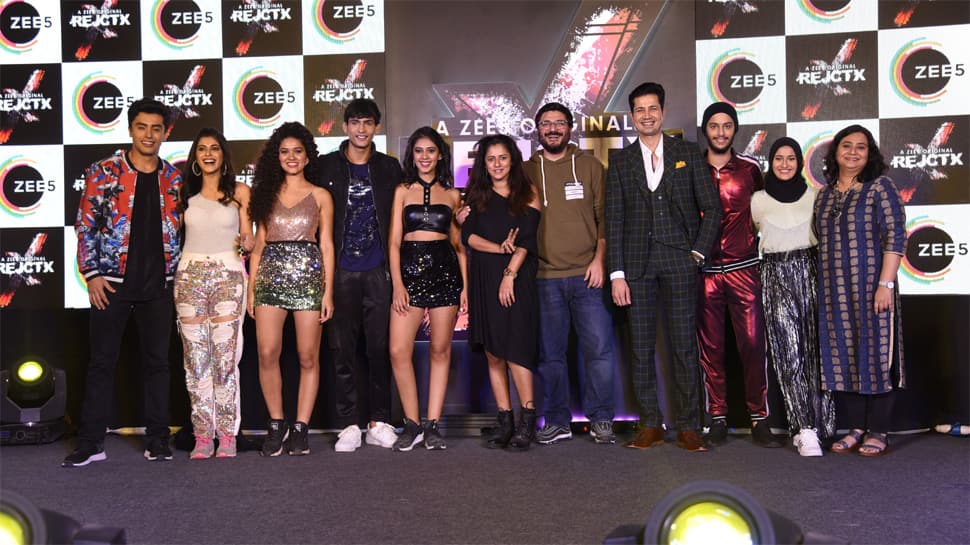 ZEE5, India's fastest growing OTT platform launched the music of their upcoming web series REJCTX at a studio in Mumbai. The evening kick-started by an electrifying performance by Sneha Khanwalkar, who has composed music for the series. It was followed by a power-packed dance performance by the cast, which comprises of 7 promising actors who will be seen making their debut with this show namely Ahmed Masi Wali, Anisha Victor, Ayush Khurana, Prabhneet Singh, Ridhi Khakhar, Saadhika Syal and Pooja Shetty.

Produced and Directed by Goldie Behl, REJCTX is the story of the millennials and it delicately addresses various teen issues through a gang of friends who set out on a journey of self-discovery. Premiering on 25th July, the series also stars actors Sumeet Vyas and Kubbra Sait in prominent roles.

Director and Producer Goldie Behl shared, “I am very excited about REJCTX and we are hoping it will throw light upon the fact, on how teens are not necessarily clueless or reckless today. We have showcased Indian kids as global kids the way it is today. Music is a very important aspect of the show and Sneha (Khanwalkar) has delivered some wonderful tracks which has a whole range of composition, singing and melody. It is for the first time a series has a completely original soundtrack with more than 12 songs. Music is the backbone to the narrative in REJCTX and audiences will now understand different aspects of Sneha's music through this album. I am excited for the series to release on ZEE5.”

Talking about her experience Sneha Kanwalkar shares, “Goldie and I have been in conversation for many years to collaborate and when he reached out and shared the story of REJCTX I immediately agreed. It has been a fantastic experience working with him. It is an interesting script which has music woven. Each track renders itself to the situation. I hope the audiences enjoy it on ZEE5 as much as we enjoyed making it.”

Sharing his excitement Masi Wali said, “We have been practising for days to ensure the performance today is on point. I am ecstatic that it turned out well. We are all nervous and hopeful that REJCTX will be enjoyed by the millennials across on ZEE5.”

Aparna Acharekar, Programming Head, ZEE5 India said, “REJCTX is a bold and unapologetic story based on the millennials today. It is beautifully layered and showcases the mindset of the youth today.  At ZEE5 we are handpicking genres and stories to ensure there are wholesome entertainment options available on our platform for all our viewers. REJCTX will be our latest addition and we are really looking forward to its release.”

'Kundali Bhagya', July 26, preview: Will Preeta leave the wedding to be with Karan?