Big-hearted Ankita Raina showed nerves of steel as she yet again rose to the occasion for India by taming experienced Yulina Putintseva in a thrilling contest to level the Fed Cup tie against Kazakhstan 1-1 on Thursday. 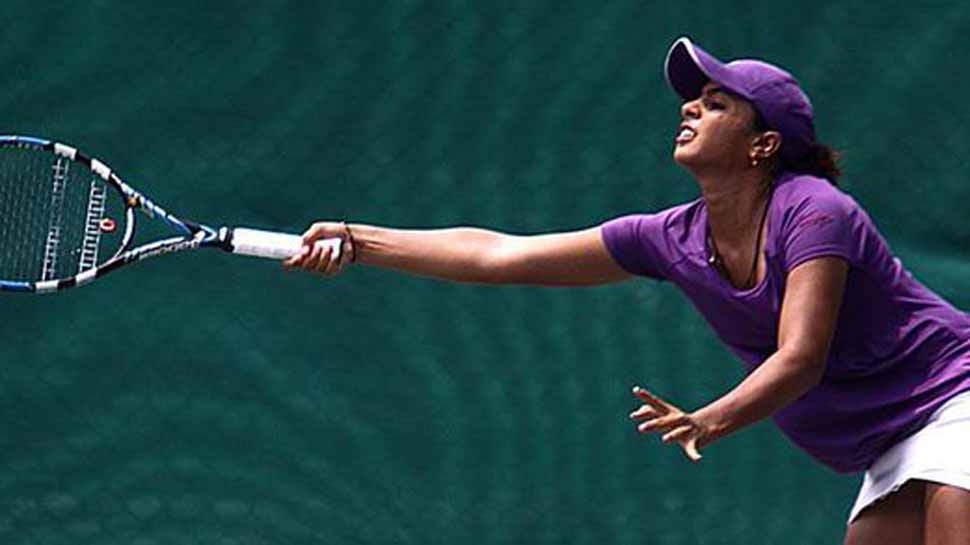 New Delhi: Big-hearted Ankita Raina showed nerves of steel as she yet again rose to the occasion for India by taming experienced Yulina Putintseva in a thrilling contest to level the Fed Cup tie against Kazakhstan 1-1, here on Thursday.

Ankita not only fought off a grinder but also shrugged off some poor umpiring to emerge a 6-3 1-6 6-4 winner after battling hard for two hours and 25 minutes against a player, who was ranked as high as 27 last year and had beaten top-10 players.

Before Ankita's inspiring win, Karman Kaur Thandi gave ample display of her talent but lacked consistency as she lost the opening singles of the Asia/Oceania Group I tie to world number 55 Zarina Diyas.

Ankita, who had beaten Lin Zhu yesterday, responded to the call from her team with an inspirational performance against the world number 81 Kazakh.

Putintseva, who beat players of the caliber of Svetlana Kuznetsova and Dominika Cibulkova en route the final of St Petersburg WTA event last year, found the going tough against Ankita, who yet again stood out with her relentless returns.

It was a dogfight from the baseline as Putintseva, a grinder from across the court, was picking everything and throwing it back.

Ankita too was prepared to put the balls back on the court, which meant points were long and hard-fought.

Ankita will now combine with Prarthana Thombare to take on Gozal Ainitdinova and Zhibek Kulambayeva in the decisive doubles.

Ankita did create a small opening to get the first break in the sixth game by hitting consistently on the backhand side of the Kazakh and then blasted a forehand winner, but the Kazakh girl played smartly to save the chance.

However, Ankita kept putting pressure on her opponent as she charged the net and Putintseva tried a lob, which went long. It put the Kazakh down 15-30.

An error from Putintseva handed Ankita two break chances and the Indian converted the second one. It was a reward of her hard work as Ankita never let Putintseva breath easy with consistent returns on her backhand side.

Despite having to play a point twice after a call error at 30-0, Ankita served out the set at love.

A break of serve was the best possible start for Ankita in the second set but some poor calls by the chair umpire and linemen not only prevented the Indian from consolidating the break but she also lost serve.

It caused a sudden change in the fortune of Putintseva, who had raced to a 4-1 lead as the Indian dropped serve again.

Ankita's strokes lost the sting a bit and riding on the momentum, Putintseva broke the Indian one more time and served out the set to make it even-steven.

Ankita's returns were not as sharp, powerful and precise as they were in the opening set. She lost serve in the third game to let Putintseva take lead in the decider.

She was down by three breakpoints in the fifth game as well but the gritty Indian, ranked just 253 in the world, fought off all break points for a crucial hold.

The slugfest continued and it was 4-4. Ankita held her own serve under pressure and broke the Kazakh one final time when Putintseva hit a backhand wide on match point to record a memorable win.

Ankita had to hold back celebration after the Kazakh team protested against a call. But the chair umpire was not convinced and Ankita bowed on the court, relieved.

Earlier, Karman took some time to settle and started playing freely only after dropping serve in the second and saving a break point in the fourth.

In a nervous start, like yesterday, she was broken at love in the second game as she hit a forehand wide and long.

While Diyas cruised to a 4-1 lead, Karman finally found some rhythm and started to stroke fluently.

Karman adopted an aggressive approach while returning as she sent deep balls on both flanks and was rewarded when she earned three breakpoints in the seventh game and converted the second one with an exquisite forehand winner.

However, the Indian girl, while trying too hard, dropped serve in the next game. Diyas was serving for the set when she went down 30-40 but Karman hit a backhand long to let go the break chance.

That was enough for the experienced Kazakh to seal the set. While Karman was fighting a lot better, she was not consistent enough. A flurry of forehand errors resulted in an early break of serve in the second set.

Karman now was serving a lot better and got the ball to bounce, using her height. She served the third game at love and was up 30-0 in the fifth but her rhythm was disturbed when she went for a replay of a point following a debatable call.

Captain Ankita Bhambri had an argument with the chair umpire and all this affected Karman, who served two double faults to drop the serve. Trailing 1-4, Karman got one break back with a well-constructed point.

It was important not to lose serve from there on but she lost it at love, allowing Diyas to serve out the match in the next.