Venus Williams admitted she needed one set to fathom Caroline Garcia`s tactics in their first meeting for more than three years after the American edged the Frenchwoman 6-7(3), 6-2, 6-3 in their WTA Finals last-four showdown on Saturday. 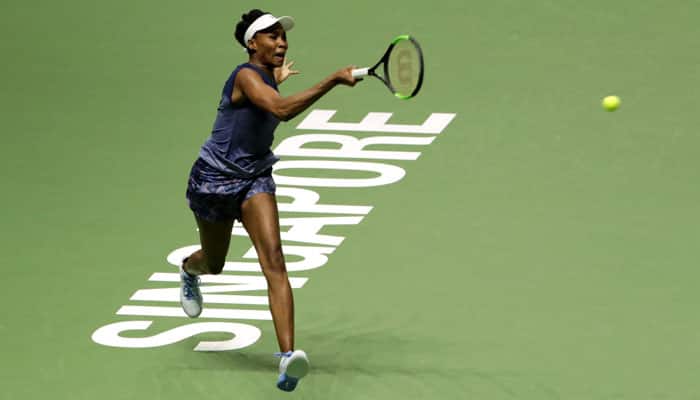 Singapore: Venus Williams admitted she needed one set to fathom Caroline Garcia`s tactics in their first meeting for more than three years after the American edged the Frenchwoman 6-7(3), 6-2, 6-3 in their WTA Finals last-four showdown on Saturday.

The pair split two matches in 2014 but Garcia has improved almost beyond recognition this season to claim back-to-back titles in China and climb to a career-high world number eight in the rankings.

"I haven`t played her in a long time. It`s hard to gauge what to expect, coming across the net," Williams, who will play Denmark`s Caroline Wozniacki in Sunday`s final, told reporters.

"She`s improved her game so much. Of course, I had a lot of respect for her. I think in the second and third (sets) I was able to figure it out a little more.

"She played so well. You never know when the last point is going to end and going to go your way. To see that match over, I was excited."

The 37-year-old American owns an impressive 7-0 win-loss record over Wozniacki but Williams is taking nothing for granted as she attempts to add a second WTA Finals title to her list of honours following a previous triumph in 2008.

"At this level, I think we`ve both improved our game. You have to improve to stay on tour. So I will see what she`s doing, see what`s working," Williams added.

Garcia was naturally disappointed to have lost out to Williams but keen to highlight how satisfying her season had been since opting to forego Fed Cup duties for her country to concentrate on her singles game.

"It`s only a lot of positive things about this season. It`s a great end of the season. A lot of things happened. I learned a lot," the 24-year-old said.

"I`m playing much better than I did at the beginning of the year but I feel like I have so much to improve. It`s like it never ends. You can still work as much as you want.

"You will never reach your full potential. You have to still keep going, and that`s great, actually. With this experience of the WTA Finals, I feel like I have so much more things to keep working on."