Nadal has reached the fourth round for the 14th time, a Roland Garros record he now shares with his likely semi-final opponent Roger Federer. 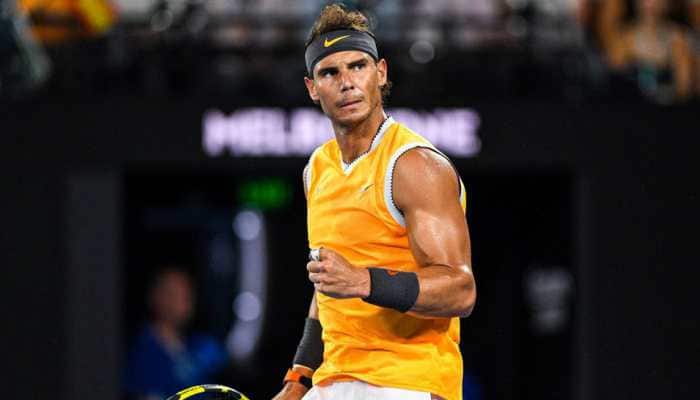 Defending champion Rafael Nadal dropped his first set at this year`s French Open but stayed firmly on course for title number 12 with a 6-1, 6-3,4-6, 6-3 defeat of David Goffin on Friday.

Nadal began at a frightening pace and dropped one point on serve in the opening set and try as he might Goffin could not get much closer to the marauding Mallorcan in the second.

It had looked like the boxing equivalent of a heavyweight taking on a lightweight, but Goffin showed some steel to go with his silky strokes to punch his way back into contention.

With the crowd offering the Belgian plenty of backing, he broke Nadal`s serve out of nowhere at 4-4 and then held to extend the contest into the early evening sunshine.

It was 10 years to the day that Nadal lost to Robin Soderling, one of only two defeats he has suffered in Paris during his long reign as the king of clay, but any flicker of hope Goffin had of making it three was quickly extinguished.

Nadal, realising he was suddenly in a battle, stamped his authority back on the contest and opened up a commanding lead in the fourth that he never relinquished.

The second seed finished it off on his first match point when Goffin skewed a backhand wide.

Nadal has reached the fourth round for the 14th time, a Roland Garros record he now shares with his likely semi-final opponent Roger Federer.

His opponent will be Argentina`s Juan Ignacio Londero who edged a five-setter against French wildcard Corentin Moutet to become the first debutant to get this far since Goffin in 2012.