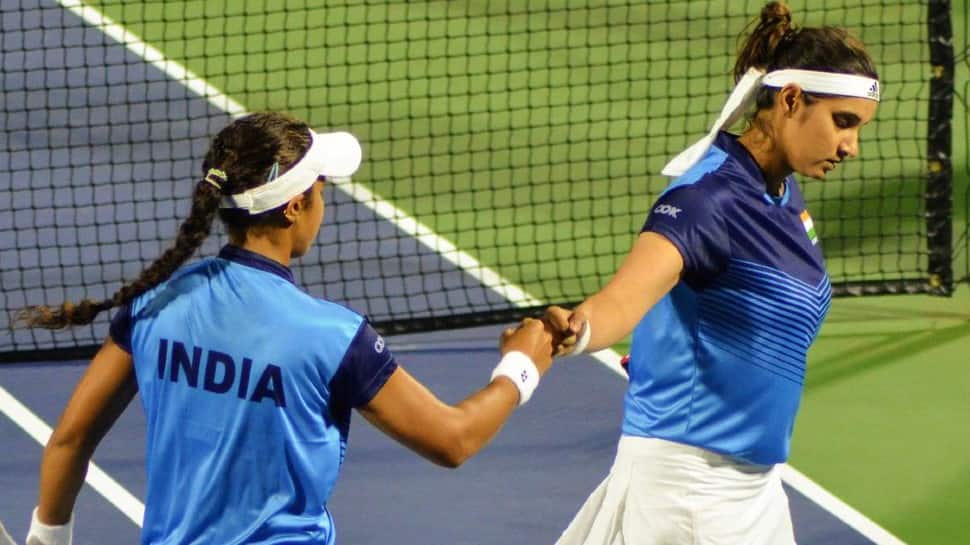 Indian doubles pair of Sania Mirza and Ankita Raina have crashed out of women's doubles first round at Tokyo Olympics. (Source: Twitter)
Share:
Written By:

Indian doubles pair of Sania Mirza and Ankita Raina were knocked out from women's doubles 1st round by Ukraine's Kichenok twins -- Liudmyla and Nadiia -- 6-0, 6-7, 8-10 in three tough sets in Tokyo on Sunday (July 25).  The Indian pair had won the 1st set 6-0 and were leading 5-3 in 2nd before sensationally faltering. Sumit Nagal is the lone tennis hope for India now in the tennis events in Tokyo Olympics and he face world No. 2 Daniil Medvedev in his second round after defeating Denis Istomin of Uzbekistan in the first round.

Meanwhile, World No 1 and newly crowned Wimbledon champion Ashleigh Barty is out in the first round as well.  She lost 4-6, 3-6 to Spain's Sara Sorribes Tormo. Barty racked up 55 unforced errors to Sorribes Tormo's 13 in the effort.

Barty, a 25-year-old two-time Grand Slam champion, was playing in her first Olympic Games. She won the 2021 Wimbledon tournament earlier this month.

Sania was serving for the match at 5-3 in the second set but perhaps nerves got the better of her and ended up dropping her serve. From there on, it was not the same match, in which the Ukrainians looked out of sort, struggling with their serves and returns.

The Indians became the prey and Ukrainians pounced on them. Sania and Raina were down 1-8 in the Super Tie break but reeled off seven straight points to make it 8-8 but lost the next two points to make an exit from the Games.

The Indians broke the Ukrainians in the second game of the match to open up a lead. What followed was a sequence of holds for the Indians but drops for their rivals. In just 21 minutes, Mirza and Raina had claimed the first set.

The Kichenok sisters finally got on board when Raina's backhand return sailed over the baseline in the second game of the second set. Raina went up 40-15 in the third game but buried a forehand return on the net and Mirza also fumbled at the net to get to deuce point. The young Indian held nerves to serve out the game with consecutive points.

Nadiia's two double faults put the Ukrainians in trouble but they came out unscathed with some solid net-play, making it 2-2. Sania hit a crushing forehand winner to earn a break chance in the sixth game but Raina's backhand return was dispatched for a drop volley winner. Another chance came India's way but Raina netted her backhand from the baseline.

Sania's backhand service return winner earned the Indians another chance and they did not squander it this time to go up 4-2. Raina had an easy hold in the next and now they were one game away from the second round.

Serving for match, Sania went 15-30 but pulled off a well calculated lob to ward off the danger. However, she made two consecutive errors to hand the Ukrainians their first break, the second being a long backhand.

From there on, the match changed dramatically and the Ukrainians started calling the shots.