The victory, completed in four minutes under two hours, was built on the Dane`s resilience, consistency and greater variation on the key points, and put the 27-year-old into her second final in the eight-woman event after losing in 2010. 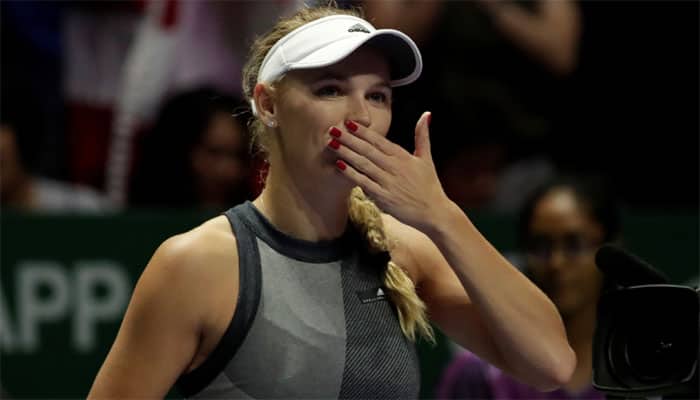 Singapore: Caroline Wozniacki stood her ground in the face of some incredible early pressure before pulling away from Karolina Pliskova to eke out a 7-6(9) 6-3 victory in a captivating semi-final showdown at the WTA Finals on Saturday.

The victory, completed in four minutes under two hours, was built on the Dane`s resilience, consistency and greater variation on the key points, and put the 27-year-old into her second final in the eight-woman event after losing in 2010.

Wozniacki goes on to meet the winner of the second semi-final between Venus Williams and Caroline Garcia later on Saturday, while Pliskova is left to rue a defeat that prevents her from being able to replace Simona Halep as world number one.

"We have had a lot of close matches this year and I was hoping today was my turn. It feels great to be in the final and I have been playing some great tennis this week," Wozniacki said in a courtside interview.

Both players had raced out of the blocks in their previous three matches in Singapore but perhaps mindful of what was at stake, they made a cagey start to their semi-final, unable to stamp any sort of authority on proceedings.

Pliskova was the aggressor and found more success when she committed to her attacking shots, while Wozniacki was content to use her supreme court coverage and stonewall defence to stay in touch.

The first five games went with serve until the Czech edged ahead by instigating a run of four straight breaks of serve as Wozniacki staved off three set points in the 10th game stay alive in the set and eventually forced a tiebreak.

The Dane then raced into a 6-1 lead over the sleepwalking Pliskova before the Czech rose from her slumber to first save all five set points and then fashion three more of her own, which Wozniacki somehow managed to survive.

Wozniacki continued to cover every inch of the court to set up another set point, her sixth, with more defensive brilliance, and the former number one sealed the opener 11-9 in the breaker when Pliskova found the net with a backhand.

The Dane was full of confidence and attempted to break free with an early break in the second set to move 3-1 ahead but Pliskova refused to buckle and stormed back by stepping in to take her shots early to get the contest back on serve.

Wozniacki changed tactics again, however, and opted to push the ball into the corners to force Pliskova into some vital errors as she struggled out of position and the Dane broke once more for a 5-3 lead.

This time there would be no way back for Pliskova as Wozniacki sent a backhand crosscourt winner past her stranded opponent to storm into the final.

"It was a little bit crazy, managing to come back from those set points and then not feeling so good about myself after being 6-1 up in the tiebreak. It was kind of a roller-coaster and I am just happy that I got the first set under my belt," Wozniacki added.