COVID rules must be followed, but the message can be passed in a creative way too, as the Railways has shown! 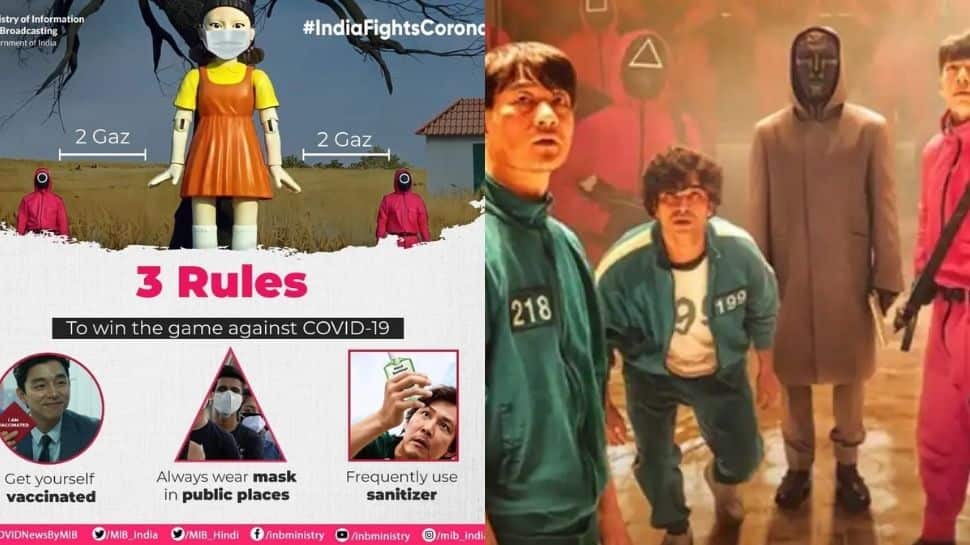 'Squid Game', the Korean Netflix show, has been dominating every other discussion recently, with its popularity soaring by the day. And the Indian Railways has decided to cash in on the show's wide reach to come up with an innovative poster to egg people to follow the COVID-19 protocols.

The Railways used a quirky creative, taking off from the popular show, to pass on its message:
Three Rules to defeat COVID19:
- Get yourself vaccinated
- Always wear mask in public places
- Frequently use sanitizer

In this creative, the giant iconic doll, is shown wearing a mask. The masked guards of the show are also maintaining social distancing - they are mainting a 2 gaz distance.

The attention to details has also impressed netizens. The show’s guest star, Gong Yoo, who's known for playing ddakji, is portrayed in the creative carrying a red envelope that reads ‘I am vaccinated’. Then there are people shown standing in queue, wearing masks.

Further, in a clever twist, Lee Jung-jae is shown holding a sanitiser bottle - in the show he holds its signature Dalgona candy.

Get yourself vaccinated
Always wear mask in public places
Frequently use sanitizer#Unite2FightCorona pic.twitter.com/PGo236rZ5n

This is not the first time that Squid Game refernce has been used to send a message. The Mumbai Police had referred to the popular to show to remind people about traffic rules. Referring to the show’s game, red light, green light, the police shared a simple hack with the public that they can use to prevent getting eliminated. "You are the ‘frontman’ of your ‘game’ on the road: you can save yourself from getting eliminated. Stop at red lights," they wrote.

Netizens were impressed and lauded Indian Railways' creativity. One Facebook user, Bhanu Sri, wrote, "Indian Railways are more updated. Many have still not seen the show but you guys have come up with innovative ideas to keep this up with corona (sic)." P Bharath and Jeeshal Ahmad also praised the Railways' creativity, as did many others on different social media platforms.

Facebook planning to change its name? Here's how memers reacted