Watch: Pride of lions climb on top of giraffe to bring it down

According to reports, the video was shot last week at Kruger National Park in South Africa. 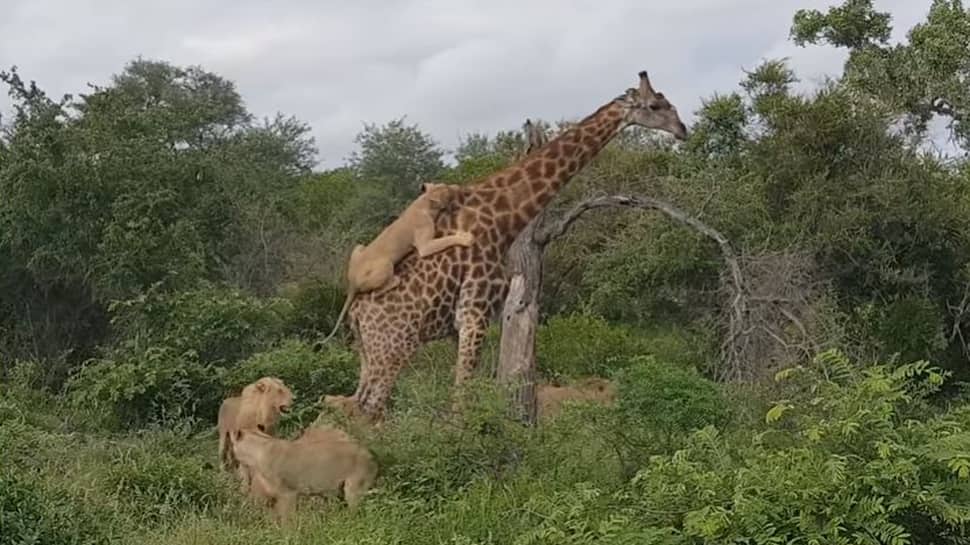 We have often seen videos where a lion can be seen hunting for its preys, who are in a herd. But in a new video, which was reportedly filmed by some tourists in a nature reserve in South Africa, the lions could be seen hunting a giraffe in a group.

In the video, one of the big cats can be seen clinging to the back of the giraffe, who continues to drag itself in an attempt to escape the attack. A couple of more lions cling on to his hind legs.

While the one on top is trying to bring down its prey from behind, the others clinging to the giraffe’s leg make repeated attempts to pull him down.

According to Newsflare, the video was shot last week at Kruger National Park in South Africa. The person who shot the video was quoted as saying that the lions made the attempt to take the giraffe down for almost five hours.

However, the giraffe remained strong throughout the struggle, refusing to give up. And after the fierce fight with the pride of lions for five long hours, the giraffe managed to get all of them off his back and walked away saving his life.

The onlookers came across the wild battle while following the pride of lions for some time. They were simply filming the lions moving in the jungle in glory, little did they know that they were about to witness one of the fiercest battles they had ever witnessed.