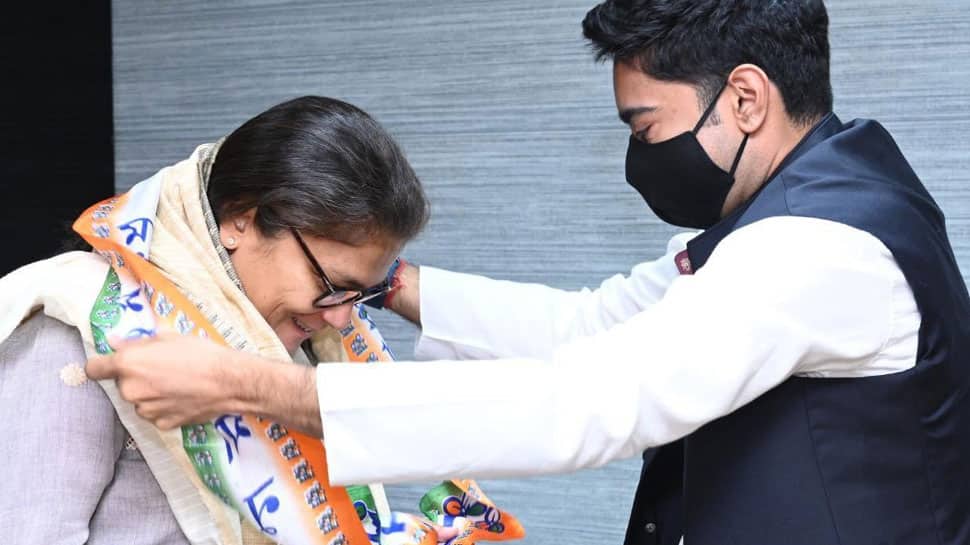 She joined the All India Trinamool Congress in the presence of party leaders Abhishek Banerjee and Derek O'Brien on Monday.

Shortly after quitting the Congress party, Dev had met TMC national general secretary Abhishek Banerjee at his office in south Kolkata, fuelling speculation about her next political move.

According to Congress sources, Dev, who had been serving as the All-India Mahila Congress chief, had sent her resignation to party chief Sonia Gandhi late on Sunday. She is also expected to meet West Bengal Chief Minister Mamata Banerjee later in the day.

"Dev visited Abhishek Banerjee's Camac Street office during the day and held a meeting with him in the presence of other senior functionaries. She may also meet Chief Minister Mamata Banerjee at Nabanna later today," a TMC leader said.

Meanwhile, Assam Pradesh Congress Committee (APCC) president Bhupen Bora told reporters in Guwahati that the former MP, who was also a national spokesperson of the grand old party, had to quit as "she is suffering from depression".

Bora also asserted that Dev was given "adequate importance" by the party high command, and any "political reason" couldn't have prompted her exit.

"This (resignation) is a sign of her depression. One cannot comprehend how much a defeat can affect a person if he or she hasn't seen Sushmita. Perhaps, she is lacking the self-confidence to rebuild the party's support base in Silchar once again," he claimed.

Dev lost her Silchar Lok Sabha constituency to BJP's Rajdeep Roy in the 2019 General Election. Asked whether her departure will hurt the Congress, the Assam unit chief said, "When a family member leaves, it is never nice... We have to work on finding more leaders like her."

She offered no reason for quitting the party. The Congress maintained that no letter has been received from her but wished her well. Party chief spokesperson Randeep Surjewala said he and other party leaders have tried to reach out to her but her phone was switched off.

"I am unable to speak to her as Sushmita ji's phone is switched off. We have tried to reach out to her. Sushmita ji is a very dear friend. She is extremely versatile, talented and capable. Sonia Gandhi ji and Rahul Gandhi ji have always appreciated it," he told reporters when asked about her resignation.

Another Congress leader Kapil Sibal has, however, said the party is moving on with its "eyes wide shut". "Sushmita Dev resigns from the primary membership of our party. While young leaders leave we 'oldies' are blamed for our efforts to strengthen it," the former union minister said on Twitter.

"The Party moves on with: Eyes Wide Shut," Sibal added.