In the last two weeks alone 164,000 mostly Rohingya civilians have fled to Bangladesh, overwhelming refugee camps that were already bursting at the seams and triggering warnings of a humanitarian crisis. 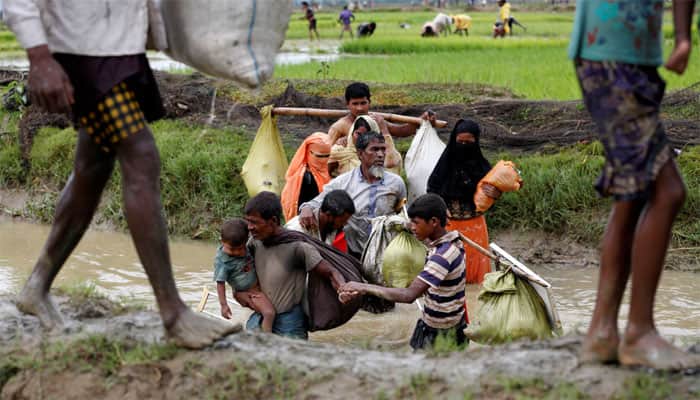 Cox`s Bazar: More than a quarter of a million mostly Rohingya refugees have entered Bangladesh since fresh violence erupted in Myanmar last October, the United Nations said Thursday, as more bodies washed up a day after boats sank attempting to cross the river that divides the two countries.

In the last two weeks alone 164,000 mostly Rohingya civilians have fled to Bangladesh, overwhelming refugee camps that were already bursting at the seams and triggering warnings of a humanitarian crisis.

Scores more have died trying to flee the fighting in Myanmar`s Rakhine state, where witnesses say entire villages have been burned to the ground since Rohingya militants launched a series of coordinated attacks on August 25, prompting a military-led crackdown.

Police in Bangladesh say they have recovered the bodies of 17 people, many of them children, who drowned when at least three boats packed with Rohingya refugees sank at the mouth of the Naf river that runs along the border.

Rohingya refugee Tayeba Khatun said she and her family had waited four days for a place on a boat to take them to Bangladesh after fleeing her township in Rakhine.

"People were squeezing into whatever space they could find on the rickety boats. I saw two of those boats sink," she told AFP.

"Most managed to swim ashore but the children were missing."Those flocking into Bangladesh have brought with them harrowing testimony of murder, rape and widespread arson by Myanmar`s army.

Most have walked for days to reach Bangladesh and the United Nations says many are sick, exhausted and in desperate need of shelter, food and water.

Existing camps which hosted around 400,000 refugees before the latest influx are now completely overwhelmed, leaving tens of thousands of new arrivals with nowhere to shelter from the monsoon rains.

Mazor Mustafa, a Bangladeshi businessman handing out food and rehydration fluids, said the situation was getting worse as more people arrived.

"It is not at all enough food," he told AFP of the ration kits being distributed.

"These people are hungry, starving to death together."

The latest figures mean that nearly a quarter of Myanmar`s 1.1 million Rohingya Muslims have fled since fighting first broke out last October.

Impoverished Bangladesh initially tried to block them from entering, but has now given up attempting to stem the tide.

On Wednesday its foreign ministry summoned the Myanmar ambassador to demand immediate measures to curb the violence.

The Rohingya are denied citizenship in mainly Buddhist Myanmar, which is under growing international pressure over its apartheid-like treatment of the stateless minority.

UN investigators have said a military crackdown that followed ambushes by Rohingya militants in October last year may amount to ethnic cleansing.The recent fighting is the fiercest in Rakhine, Myanmar`s poorest state, in years.

Cattle rancher Mohammad Shaker, 27, crossed into Bangladesh on Thursday suffering a gunshot wound to his chest that he said was inflicted by Myanmar soldiers.

"I tried to flee with our stock near the river when the military started shooting at us," he told AFP, nursing his untreated wound.

"I fell on the ground and later my relatives found me. We hid in the hills for days, and this morning managed to come here."

Scores of refugees have arrived in Bangladesh needing treatment for serious bullet wounds, while others have lost limbs after apparently setting off landmines along the border.

On Thursday a mass funeral was held at a mosque near the border for five men whose relatives said they had been shot dead by the Myanmar military. The relatives carried their bodies over the border so they could be buried in Bangladesh.

Myanmar says some 27,000 mainly ethnic Buddhist Rakhine have also fled in the opposite direction since August 25, accusing Rohingya militants of targeting their communities.

It has placed the blame for the violence squarely on the militants, saying they are setting fire to their own homes.

Myanmar said Thursday that 6,600 Rohingya homes and 201 non-Muslim homes had been burned to the ground since August 25.

They added some 30 civilians had been killed — seven Rohingyas, seven Hindus and 16 Rakhine Buddhists — in the fighting.

Myanmar`s army has previously said around 430 people had been killed in the fighting, including militants and soldiers.