Jihadists with links to Islamic State and al Qaeda have mounted increasingly lethal attacks across West Africa`s Sahel region this year despite the commitment of thousands of regional and foreign troops to counter them. 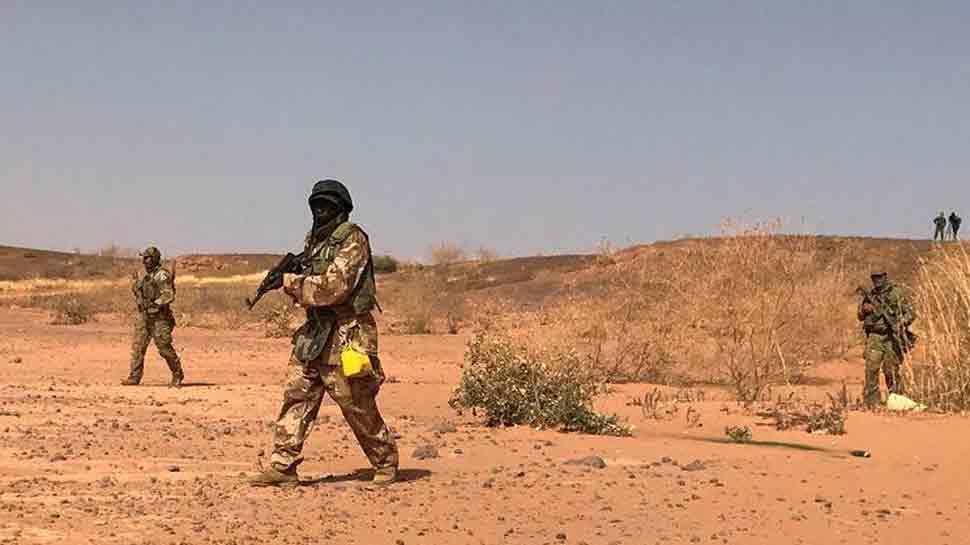 NIAMEY: Islamist militants killed 71 soldiers in an attack on a remote military camp in Niger near the border with Mali, an army spokesman said on Wednesday, in the deadliest raid against the Nigerien military in living memory.

Jihadists with links to Islamic State and al Qaeda have mounted increasingly lethal attacks across West Africa`s Sahel region this year despite the commitment of thousands of regional and foreign troops to counter them.

The violence has hit Mali and Burkina Faso the hardest, rendering large swathes of those countries ungovernable, but it has also spilled into Niger, which shares long and porous borders with its two neighbours.

Several hundred militants attacked a base in the western Niger town of Inates over a period of three hours on Tuesday evening, army spokesman Colonel Boubacar Hassan said on state television.

It was in the same area where Islamic State’s West African branch killed nearly 50 Nigerien soldiers in two attacks in May and July.
"The combat (was) of a rare violence, combining artillery shells and the use of kamikaze vehicles by the enemy," he said.

He added that another 12 soldiers were wounded and an unspecified number of others were missing, while a "significant number" of militants were also killed. Two security sources, speaking on condition of anonymity, said that 30 soldiers were still missing.

President Mahamadou Issoufou arrived in Niger on Wednesday evening after cutting short a visit to Egypt, his office said in a tweet.

The attack comes at the end of a year of intense violence in Inates, a cattle herding community near the banks of the Niger River 200 km (130 miles) north of the capital Niamey.

Apart from raids on the army, jihadists looking to assert control have targeted civilians too, killing two village chiefs this year, according to two local sources.

Since July, hundreds of people have fled the area for the capital Niamey or other nearby towns, the sources said, leaving their cattle and houses untended and unguarded.

TENSIONS WITH FRANCE
Security has deteriorated this year across the Sahel, a semi-arid strip of land beneath the Sahara, amid jihadist attacks and deadly ethnic reprisals between rival farming and herding communities.

The region has been in crisis since 2012, when ethnic Tuareg rebels and loosely-aligned jihadists seized the northern two-thirds of Mali, forcing France to intervene the following year to beat them back. But the jihadists have since regrouped and expanded their range of influence.

The rising body count this year has inflamed popular anger against regional governments and former colonial master France, which has 4,500 troops deployed across the Sahel.

French President Emmanuel Macron, frustrated by mounting anti-French sentiment, has invited five West African leaders to a meeting next week. There he plans to ask them to clarify whether they want French troops to remain in their countries.

Domestic pressure has also risen after a helicopter accident in Mali last month killed 13 French troops. "We have no interest in this region other than for our own security," French Foreign Minister Jean-Yves Le Drian said in an interview with Le Monde on Wednesday.

"If this doesn’t get resolved through accords and a clarification of commitments, we will have to ask ourselves questions and rethink our military positioning," he said. But he added that a withdrawal of French troops from the region was not on the table.

Some of the countries, who participate in the French-backed G5 Sahel military force, have reacted coolly to what they see as an ultimatum from Paris.

Malian government spokesman Yaya Sangare said on Wednesday that President Ibrahim Boubacar Keita would attend next Monday`s meeting in southwestern France "under conditions" transmitted to France`s envoy to the Sahel.

A Paris-based West African diplomat said the five countries had taken Macron`s summons badly. "I think he should treat his elders with a bit more respect," the diplomat said.