Kamala Harris is the daughter of an Indian mother and an African-American father from Jamaica. She was born in Oakland, California, in 1964, to parents who raised her in a bassinet of civil rights activism. Her mother, Shyamala Gopalan Harris from Chennai, was a breast cancer researcher who died of cancer in 2009. Harris' father, Donald, is a Jamaican American professor of economics. 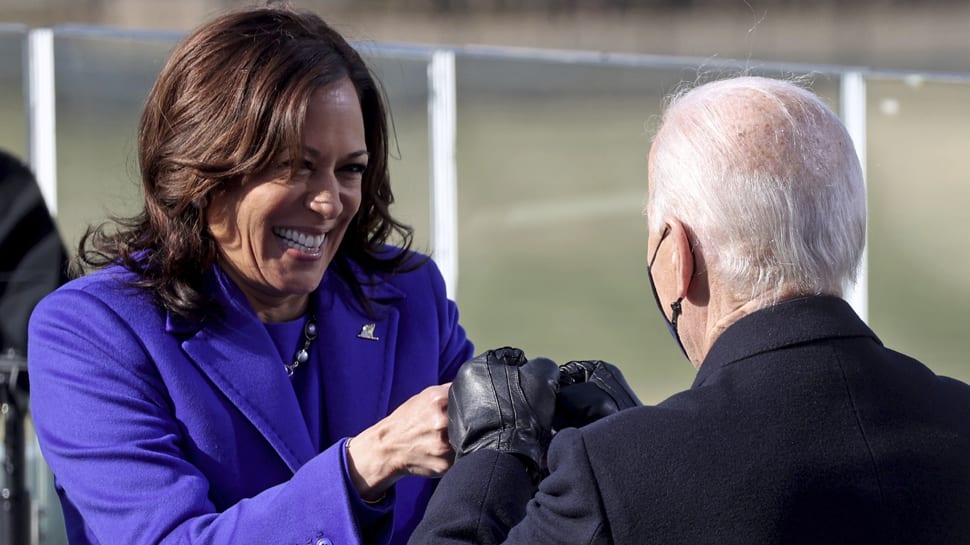 Indian-origin Kamala Harris was on Wednesday sworn in as America's first woman Vice President during a historic inauguration at the West Front of the Capitol. Harris, 56, the 49th US Vice President, will serve as the deputy of President Joe Biden, 78, who also took the oath of office, becoming the 46th US President.

Harris took over the office of the US Vice President from 61-year-old Mike Pence. Biden succeeded President Donald Trump, 74. Harris, the daughter of an Indian immigrant from Chennai, scripted history by becoming the first-ever woman Vice President of the United States. She is also the first female, first Black and first South Asian American vice president.

Her husband Douglas Emhoff, 56, is the first 'Second Gentleman' - the first male spouse of a vice president in the US. Justice Sonia Sotomayor, the first Latina member of the Supreme Court, administered the oath of office to Harris. She was sworn in on two Bibles - one that belonged to a close family friend named Regina Shelton and another that belonged to Thurgood Marshall - the country's first African American Supreme Court justice.

Harris is the daughter of an Indian mother and an African-American father from Jamaica. She was born in Oakland, California, in 1964, to parents who raised her in a bassinet of civil rights activism. Her mother, Shyamala Gopalan Harris from Chennai, was a breast cancer researcher who died of cancer in 2009. Harris' father, Donald, is a Jamaican American professor of economics.

On the campaign trail, Harris often talked about how her activist parents would push her in her stroller at civil rights marches. The couple divorced in 1972. Harris grew up in the Bay Area but took frequent trips to India to visit extended family. At 12, she and her sister, Maya, moved with their mother to Montreal, where Gopalan Harris had secured a teaching post at McGill University as well as a research position at the Jewish General Hospital.

After graduating from Howard in 1986 for her undergraduate degree and from the University of California's Hastings College of the Law in 1989, Harris passed the bar the following year and joined the Alameda County prosecutor's office as an assistant district attorney. From there, she began her political ascent.

The inauguration, which was held in the midst of the COVID-19 pandemic, saw no large gatherings as the Presidential Inaugural Committee and local law enforcement officials had asked the public not to travel to Washington DC for the event. Elaborate security arrangements were put in place for the historic inauguration following the January 6 riot at the Capitol by supporters of outgoing President Trump.

The event was held under the unprecedented security umbrella of over 25,000 National Guards, who have transformed the capital into a garrison city, mainly because of the threat of more violent protests by the supporters of Trump. Trump on Tuesday extended "best wishes" to the new administration in a farewell video address.

Trump has not only refused to concede the elections for more than two months, but also did not invite his successor to the White House as is the custom. The ceremony was attended by former presidents Barack Obama, George W Bush and Bill Clinton. Former first ladies Michelle Obama, Laura Bush and Hillary Clinton are also set to attend the event.

Biden and Harris will attend a traditional Pass in Review with members of the military on the East Front of the Capitol, signifying the peaceful transfer of power to a new commander-in-chief. Biden, Harris and their spouses will visit Arlington National Cemetery in Virginia, where they will lay a wreath at the Tomb of the Unknown Soldier.

After the wreath ceremony, they will head to the White House, where they will get a presidential escort. That will kick off the virtual "Parade Across America," featuring performances from all 56 states and territories. The new administration enters the White House with the top challenge to lift the country from the devastation of the coronavirus pandemic that has killed over 400,000 Americans and thrown millions into economic distress. Revival of the economy, which has been badly bruised by the pandemic, is another challenge that he faces.

Meanwhile, the American capital has been virtually turned into a garrison city, amidst multiple reports of threats and more armed violence by pro-Trump supporters to disrupt the events. The area in and around Capitol Hill, a large part of Pennsylvania Avenue and the White House has been made out of bounds for the general public with eight-feet high iron barricades being erected.

In addition to converting downtown Washington D.C. Into a fortress, security in and around 50 State Capitols has also been put on high alert to ensure a peaceful transition of power. US defence officials say they are also worried about an insider attack or other threat from service members involved in securing Biden's inauguration, prompting the FBI to vet all of the 25,000 National Guard troops deployed for the event.