North Korea is considering suspending talks with the United States and may rethink a freeze on missile and nuclear tests unless Washington makes concessions, a senior diplomat said on Friday, according to news reports from the North`s capital. 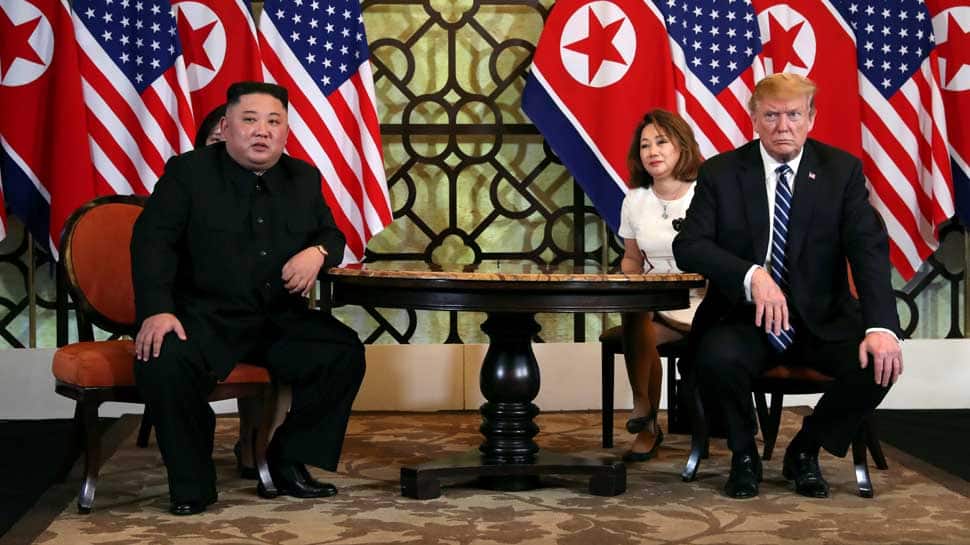 SEOUL/WASHINGTON: North Korea is considering suspending talks with the United States and may rethink a freeze on missile and nuclear tests unless Washington makes concessions, a senior diplomat said on Friday, according to news reports from the North`s capital.

US Secretary of State Mike Pompeo said the United States wished to continue talks with North Korea and had "every expectation" that its leader, Kim Jong Un, would stick to pledges not to resume nuclear and missile testing. Pompeo gave no sign of U.S. willingness to soften its stance in demanding that North Korea give up its nuclear weapons.

North Korean Vice Foreign Minister Choe Son Hui blamed top U.S. officials for the breakdown of last month`s summit between Kim and U.S. President Donald Trump in Hanoi, Russia`s TASS news agency and the Associated Press reported."We have no intention to yield to the U.S. demands (at the Hanoi summit) in any form, nor are we willing to engage in negotiations of this kind," TASS quoted Choe as telling reporters in the North Korean capital.

The second Trump-Kim summit broke down over differences about U.S. demands for Pyongyang to denuclearize and North Korea`s demand for dramatic relief from international sanctions imposed for its nuclear and missile tests, which it pursued for years in defiance of U.N. Security Council resolutions.

Choe said Pompeo and U.S. national security adviser John Bolton "created the atmosphere of hostility and mistrust and, therefore, obstructed the constructive effort for negotiations between the supreme leaders of North Korea and the United States", TASS reported.

Kim would make an announcement soon on his position on the denuclearization talks and North Korea`s next steps, TASS quoted Choe as saying. She said Washington had thrown away a golden opportunity at the summit and warned that Kim might rethink a moratorium on missile launches and nuclear tests, AP reported.

"I want to make it clear that the gangster-like stand of the U.S. will eventually put the situation in danger," AP quoted Choe as saying.

However, she added: "Personal relations between the two supreme leaders are still good and the chemistry is mysteriously wonderful." Bolton told reporters outside the White House Choe`s statement was "inaccurate." He said he had spoken to his South Korean counterpart but wanted to consult with other U.S. officials before responding further.

Bolton later accompanied Trump to a pre-arranged meeting with top defense officials at the Pentagon.

US SEEKS MORE `CONVERSATIONS` WITH NORTH

Pompeo told reporters it was not the first time he had been called "gangster-like" by North Korea. "And following that we continued to have very professional conversations ... I have every expectation we will be able to continue to do that," he said. Pompeo said that in her remarks, Choe had left open the possibility that negotiations would continue.

"It`s the administration`s desire that we continue to have conversations around this," Pompeo said. "As the president said when he was in Hanoi, the offer that they made simply didn`t rise to the level that was acceptable, given what they were asking for in exchange."

Kim had committed multiple times to Trump in Hanoi that he would not to resume nuclear or missile testing, Pompeo said. "That`s Chairman Kim`s word. We have every expectation he will live up to that commitment."

Pompeo told Fox News he did not want to forecast "what we will do or what we might do" if Kim were to resume testing, but added: "That would be most unfortunate. I think Chairman Kim understands that."

Trump has pointed to North Korea`s freeze in nuclear and missile testing since 2017 as a positive outcome from nearly a year of diplomatic engagement with North Korea. He and Kim had previous exchanged fiery rhetoric that had raised fears of war.

Washington has said it is closely watching activity at a North Korean rocket site that U.S. think tanks have said could be preparations for a new launch. Trump has made much of his personal chemistry with Kim and has said he would be "very disappointed" in Kim if North Korea were to resume testing.

South Korea, which has an ambitious agenda of engagement with North Korea that is dependent on Pyongyang and Washington resolving at least some of their differences, said it was too early to tell what Choe`s comments might mean. "We cannot judge the current situation based solely on Vice Minister Choe Son Hui`s statements. We are watching the situation closely. In any situation, our government will endeavour for the restart of North Korea-U.S. negotiations," South Korea`s presidential Blue House said in a statement.

"They`re putting down a marker, saying which way things are headed if nothing changes," Pollack, of the James Martin Center for Nonproliferation Studies in Monterey, California, said.

Joel Wit of the 38 North think tank said North Korea was likely toughening its negotiating position after the collapse of the Hanoi summit. "It is likely to gauge the U.S. reaction in the days ahead before making a decision to launch a rocket," he said.

Choe had said after the Hanoi talks that Kim might lose his commitment to pursue a deal with the United States after seeing it reject a request to lift some sanctions in return for the North destroying its main known nuclear complex. In Beijing, Premier Li Keqiang urged patience and further dialogue between North Korea and the United States.

Earlier on Friday, a spokeswoman for South Korea`s Ministry of Unification told a press briefing that the weekly inter-Korean meeting scheduled at a liaison office in Kaesong, North Korea, had been cancelled after the North Koreans said they would not be sending senior officials. The spokeswoman said the ministry had not confirmed why the North Korean officials decided not to attend.

US, EU, Canada slap sanctions on Russia over aggression against Ukraine