In the first interceot the Typhoon escorted a Russian military Antonov An-12 transport aircraft on June 25 and a few hours later on the same day, the Euofighters were once again airborne after two Russian Sukhoi Su-27 fighters and one Ilyushin IL-22 (Coot B) military transport aircraft were spotted. On June 14 and 15, RAF Typhoon jets on QRA had intercepted Russian Sukhoi Su-30 fighter aircraft flying to the north of Estonia twice. 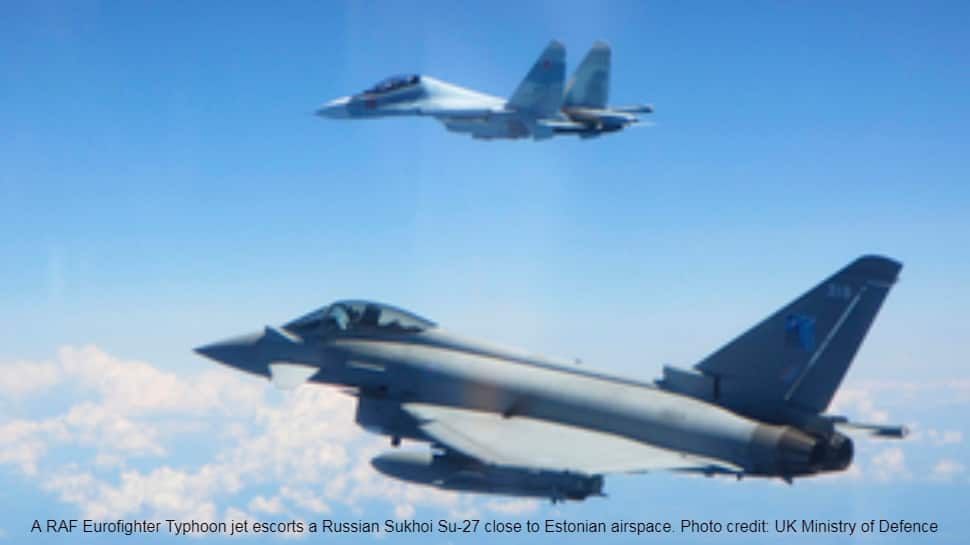 In the first intercept, a Typhoon jet of XI(Fighter) Squadron, attached to 121 Expeditionary Air Wing (EAW), was scrambled after a Russian military plane was tracked on radar. The Typhoon intercepted a Russian military Antonov An-12 transport aircraft. Within a few hours on the same day, the Typhoons were once again airborne after two Russian Sukhoi Su-27 fighters and one Ilyushin IL-22 (Coot B) military transport aircraft were spotted.

"We were scrambled to intercept a single aircraft that was flying down the Finnish/Estonian border from the East. We were tasked to identify the contact and shadow which is standard protocol. We identified the contact as an AN-12 (Cub) military transport and shadowed it in a westerly direction. Once the task was completed we were cleared to leave the contact and conduct training in segregated Estonian airspace," a Typhoon pilot from XI(Fighter) Squadron, attached to 121 Expeditionary Air Wing (EAW), who was conducting Quick Reaction Alert (QRA) duty when the first scramble was called, was quoted as saying in a Royal Air Force press release.

Another pilot, who was part of the second intercept involving the Sukhoi Su-27 fighters, said, "We were scrambled to intercept three contacts that were transiting from north west Russia around Estonia to Kaliningrad. We were tasked to identify the contacts and shadow them. We intercepted the aircraft off the west coast of Estonia, identified the contacts as an IL-22 (Coot B) military transport and two SU-27 Flanker fighters. The contacts were shadowed southward before handing them over to Swedish Quick Reaction Alert aircraft, two SAAB Gripens."

The RAF said that both scrambles flew safely and operated in a professional manner throughout the intercept. The twin intercepts on June 25 take the number of such incidents to 11 since the RAF took over enhanced Air Policing (eAP) from the German Air Force on May 3, 2019, as part of Baltic Air Policing.

On June 14 and 15, RAF Typhoon jets on QRA had intercepted Russian Sukhoi Su-30 fighter aircraft flying to the north of Estonia twice. The first intercept involved Typhoons scrambling after one Russian Su-30 jet was detected and on June 15 the RFA jets were called in again after another Su-30 and an Ilyushin IL-76 Candid transport aircraft came near the Estonian airspace.