A Solar Eclipse takes place when the Moon moves between the Sun and Earth and casts a shadow on Earth, fully or partially blocking the Sun's light in some areas. 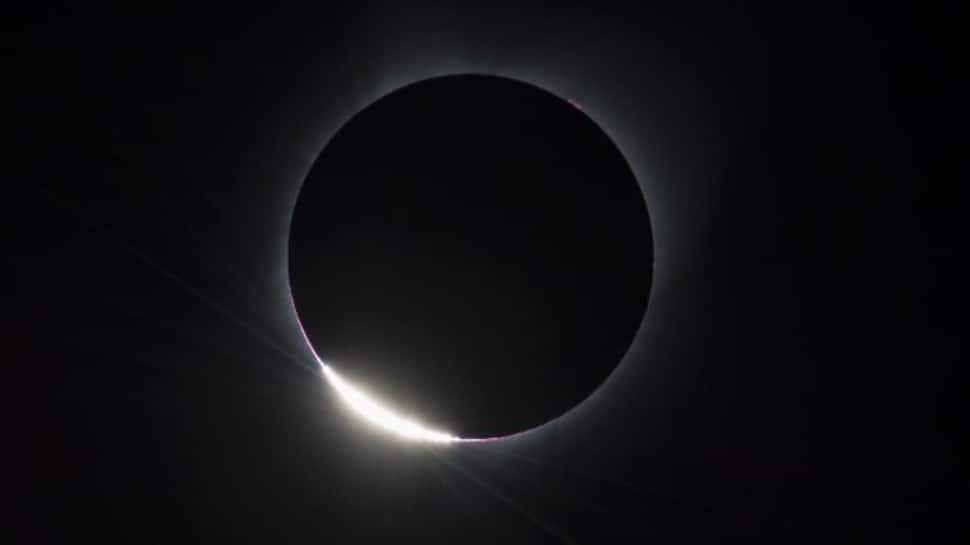 New Delhi: Stargazers are in for a treat as the last Solar Eclipse (Surya Grahan) of 2021 will take place today (December 4). People across some parts of the world will have the chance to experience a total or partial eclipse of the Sun.

A solar eclipse, notably, takes place when the Moon moves between the Sun and Earth and casts a shadow on Earth, fully or partially blocking the Sun's light in some areas.

For a total solar eclipse to take place, the Sun, Moon, and Earth need to be in a direct line.

Announcing the @cessi_iiserkol prediction for the Sun's coronal magnetic field for the 4 December 2021 Solar Eclipse. The total #SolarEclipse will be visible only over Antarctica. Excited about eclipses? See our resources for the public and scientists at: https://t.co/oSS7ExRake pic.twitter.com/YpV6QjlOH7

People located in the center of the Moon’s shadow when it hits Earth are then able to see a total eclipse.

Will Solar Eclipse (Surya Grahan) be visible in India?

According to the National Aeronautics and Space Administration (NASA), the only place where this total solar eclipse can be seen is Antarctica. In some places, while viewers won't get to see the total solar eclipse, they'll instead witness a partial solar eclipse. This, notably, happens when the Sun, Moon, and Earth are not exactly lined up and the Sun will appear to have a dark shadow on only part of its surface.

People in parts of Saint Helena, Namibia, Lesotho, South Africa, South Georgia and Sandwich Islands, Crozet Islands, Falkland Islands, Chile, New Zealand, and Australia will experience a partial solar eclipse. In many of these countries, the eclipse will occur before, during, and after sunrise or sunset. Stargazers will need to get a clear view of the horizon during sunrise or sunset in order to see the eclipse.

How can India and other countries see Solar Eclipse (Surya Grahan)?

If the weather permits, a view of the total solar eclipse from Union Glacier (Antarctica) will be streamed on NASA's YouTube channel and on nasa.gov/live.

Are you in Antarctica? It's cool if you're not. You can still enjoy the only total #SolarEclipse of 2021 on Dec. 4. Watch it LIVE: https://t.co/HH1sEaccXd

How to watch a Total or Partial Solar Eclipse (Surya Grahan)?

People should note that it is never safe to look directly at the Sun, even if the Sun is partly or mostly obscured. When viewing a partial solar eclipse, a person must wear solar viewing or eclipse glasses throughout the entire eclipse if he/she wants to face the Sun. Solar viewing or eclipses glasses are NOT regular sunglasses and regular sunglasses are not safe for viewing the Sun.

If a person is in the path of a total solar eclipse, he/she can take off his/her solar viewing or eclipse glasses only when the Moon is completely blocking the Sun.

If a person doesn’t have solar viewing or eclipse glasses, he/she can also use an alternate indirect method, such as a pinhole projector.