Over the skies of Europe, the B-1B Lancers were joined by Sukhois, MiGs and F-16s as well as Turkish Air Force's KC-135 Stratotanker aerial refuelling aircraft. It was the first time ever that the B-1B Lancers flew with Su-27s and MiG-29s as their escort. 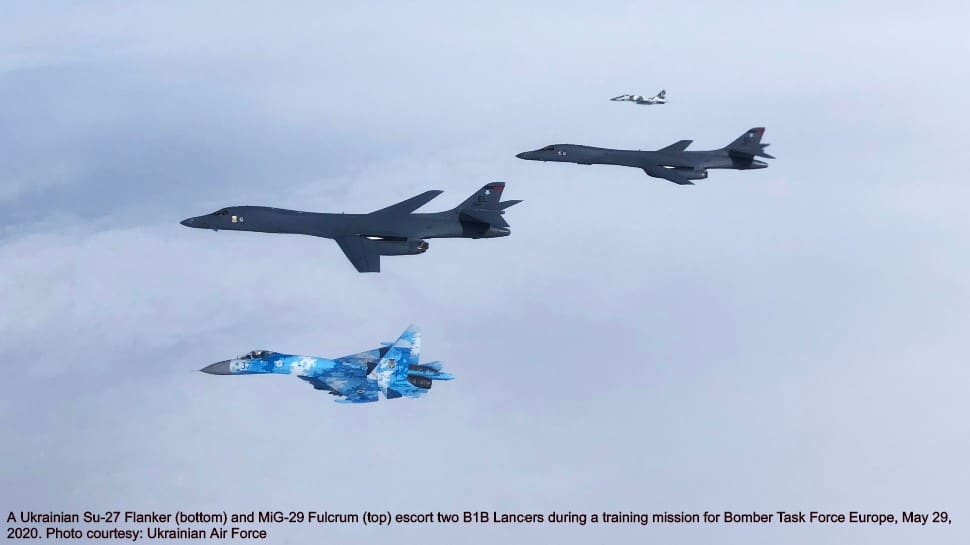 In a historic development, combat aircraft developed during the Cold War by the former USSR and United States of America to target each other came together to undertake a mission over the skies of Europe and Black Sea region. Sukhoi Su-27 (Nato code name Flanker), Mikoyan-Gurevich MiG-29 (Nato code name Fulcrum) of the Ukrainian Air Force and Romanian MiG-21s (Nato code name Fishbed) flew with US B-1B Lancers and Polish F-16 Fighting Falcon as part of a Bomber Task Force on May 29, 2020.

According to the United States European Command, two B-1B Lancer nuclear bombers took off from Ellsworth Air Force Base in USA's South Dakota for a long-range, long-duration strategic Bomber Task Force mission throughout Europe and the Black Sea region, May 29, 2020.

Over the skies of Europe, the B-1B Lancers were joined by Sukhois, MiGs and F-16s as well as Turkish Air Force's KC-135 Stratotanker aerial refuelling aircraft. It was the first time ever that the B-1B Lancers flew with Su-27s and MiG-29s as their escort. 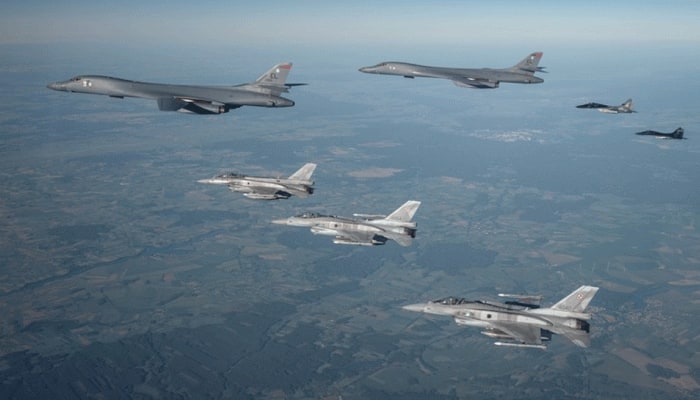 "This marked the first time that a Bomber Task Force mission integrated with Ukrainian Su-27 Flankers and MiG-29 Fulcrums and Turkish KC-135s. Bomber Task Force missions to Europe demonstrate commitment to our allies and partners all while providing a clear deterrence message to any adversary. The integration of our strategic bomber presence across Europe proves that the U.S., alongside any ally or partner, stands ready to deter, and if needed, can employ these capabilities together," said General Jeff Harrigian, US Air Forces in Europe and Air Forces Africa commander.

The escort duty was taken over by Polish F-16s and MiG-29s as well as Romanian F-16s and MiG-21s once the bombers were over the waters of the Black Sea.

The mid-air refuelling of the two B-1B bombers was taken care of by KC-135 Stratotanker from the 100th Air Refueling Wing, RAF Mildenhall, England along with Turkish and US KC-135s based out of Incirlik Air Base, Turkey. Some of the fighters escorting the bombers were also refuelled mid-air by the tankers.

NATO's newest member North Macedonia, too, provided F-16 fighter escort to the B-1B Lancers for an overflight of Skopje.

"The Bomber Task Force missions demonstrate to our NATO Allies, including our newest member - North Macedonia - that these strategic missions enhance the readiness and training necessary to respond to any potential crisis or challenge around the globe," said General Tod D. Wolters, US European Command commander. "The integration and interoperability with our NATO Allies during these missions, be it aerial tanker support or fighter escorts, are indelible actions that show the Alliance is as strong as I've ever witnessed."