Russia has upgraded the MiG-31BMs with improved avionics, radar, HOTAS controls. The jets are also armed with Vympel R-77 missile which has a range of over 100 km, and Kh-31 anti-radiation missile (ARM). 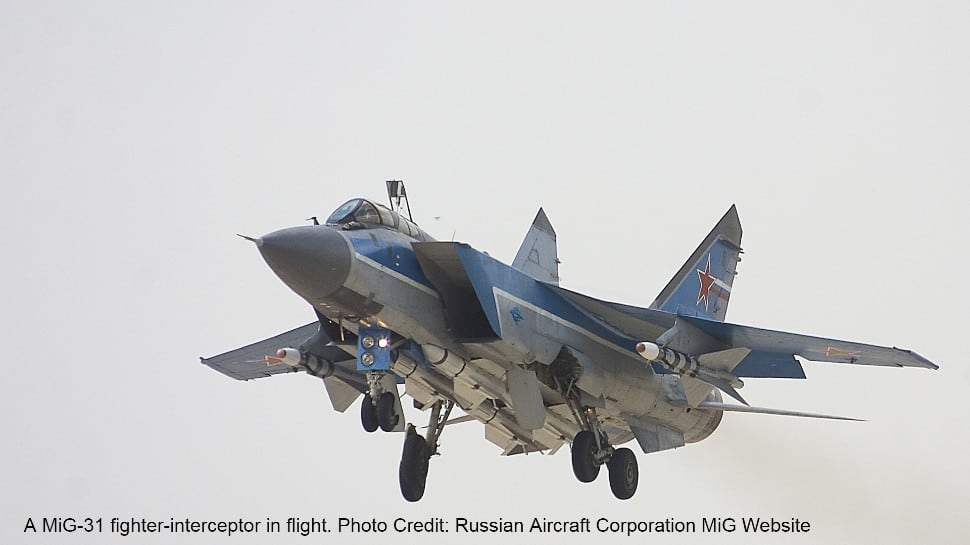 Two Russian supersonic MiG-31BM fighters (NATO code name: Foxhound) clashed in the rarified atmosphere of the stratosphere, almost 20 kilometres above the earth's surface a few days ago. But it was not a real fight, rather the dogfight was part of a drill conducted by Russia's Pacific Fleet over the Kamchatka Peninsula in the eastern region of the country to improve the combat skills of the pilots.

The dogfight involving the two twin-seater MiG-31BMs, one of the fastest fighters ever built, was the first-ever in the stratosphere. While one MiG-31BM acted as an intruder, the other fighter was scrambled to intercept and stop the invading combat aircraft. The intruding MiG-31BM had been tasked with dodging the air defence systems and entering the Russian airspace in the lower part of the stratosphere at its maximum cruise speed of 2,500 kilometres per hour.

Russia's Pacific Fleet also issued a statement on the drill. "In accordance with the combat training plan, the crews of MiG-31BM high-altitude fighters of the Pacific Fleet’s naval aviation based in Kamchatka held a training exercise to intercept a notional intruder of Russia’s airspace in the stratosphere. For the first time ever, new upgraded MiG-31BM high-altitude interceptor-fighters took part in a dogfight at their service ceiling. The fighters flew at a speed of 2,500 km/h and an altitude of more than 20 km. The training exercise became one of the stages for fighter pilots to learn to operate new and upgraded aircraft and to sharpen their piloting skills required for air defense combat patrols," the statement read as reported by Russia's TASS news agency.

According to the Pacific Fleet, the intercepting MiG-31BM was instructed to find and stop the attacking aircraft without the help of ground-based air defence systems. During the dogfight, the pilots locked on to their targets and launched the long-range air-to-air missiles electronically to "destroy the enemy aircraft". The combat drill involved the MiG-31BM pilots making six flights into the stratosphere.

Russia has upgraded the MiG-31BMs with improved avionics, new multimode radar, hands-on-throttle-and-stick (HOTAS) controls, liquid crystal (LCD) colour multi-function displays (MFDs), and armed them with Vympel R-77 missile which has a range of over 100 km, and Kh-31 anti-radiation missile (ARM).top