Tensions escalated between India and Pakistan in the wake of the Pulwama terror attack in Kashmir which killed 40 CRPF personnel and was claimed by Pakistan-based terror group Jaish-e-Mohammad (JeM). 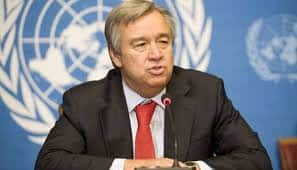 United Nations: UN chief Antonio Guterres has not spoken with Prime Minister Narendra Modi and his Pakistani counterpart Imran Khan, but discussed with officials from India and Pakistan the heightened tensions arising after the Pulwama terror attack, a top official has said.

Tensions escalated between India and Pakistan in the wake of the Pulwama terror attack in Kashmir which killed 40 CRPF personnel and was claimed by Pakistan-based terror group Jaish-e-Mohammad (JeM).

After the suicide attack, India carried out air strikes against the biggest training camp of JeM in Balakot in Pakistan on February 26. In the operation, a very large number of JeM terrorists, trainers, senior commanders and groups of jihadis who were being trained for suicide attacks were killed.

The next day, Pakistan Air Force retaliated and downed a MiG-21 in an aerial confrontation and captured Indian pilot Abhinandan Varthaman, who was handed over to India on Friday. "We're fully aware of the situation. The Secretary-General has had no calls with those two Heads of Governments as far as I'm aware, but he's had contacts with both sides to express, I think, his concern and the need to do as much as anyone can to de-escalate the tensions," Guterres' spokesperson Stephane Dujarric told reporters on Tuesday.

Dujarric was asked if the UN chief spoke with the Prime Ministers of India and Pakistan on the rising tensions between the two nuclear-armed neighbours. Last week, Dujarric said Guterres was following with "deep concern" the escalating situation between the two countries, calling on both sides to urgently take steps to lower tensions through "meaningful mutual engagement".

The UN chief is "obviously, following the situation as we see it even today with deep concern, and his message, both publicly and privately, to both sides is to urgently take steps to lower tensions through meaningful, mutual engagement and meet their responsibilities to maintain peace and security in the region," he said on Wednesday.

When asked if the Secretary General was planning to get involved to try and mediate a de-escalation, Dujarric had said that "as always", the UN chief's good offices are always "available should both parties or all parties, depending on the situation, agree to do that".

In the days following the Pulwama attack, Guterres repeatedly stressed on the importance for both sides to exercise maximum restraint and take immediate steps to de-escalation. Guterres reiterated his strong condemnation of the terrorist attack against Indian security forces and said it was "essential that there be accountability under international law and the perpetrators of terrorist acts be brought swiftly to justice".

The UN Security Council in a press statement had also "condemned in the strongest terms the heinous and cowardly" suicide bombing in Pulwama. Forty Central Reserve Police Force personnel were killed and many injured on February 14 in one of the deadliest terror attacks in Jammu and Kashmir when a JeM suicide bomber rammed a vehicle carrying over 100 kg of explosives into their bus in Pulwama district.