US President Donald Trump celebrates Thanksgiving with US troops in Afghanistan, says talks with Taliban revived

"We are going to stay until such time as we have a deal, or we have total victory, and they want to make a deal very badly," he said while reiterating his decision to reduce the presence of US troops in Afghanistan to 8,600 from the current 12,000-13,000. 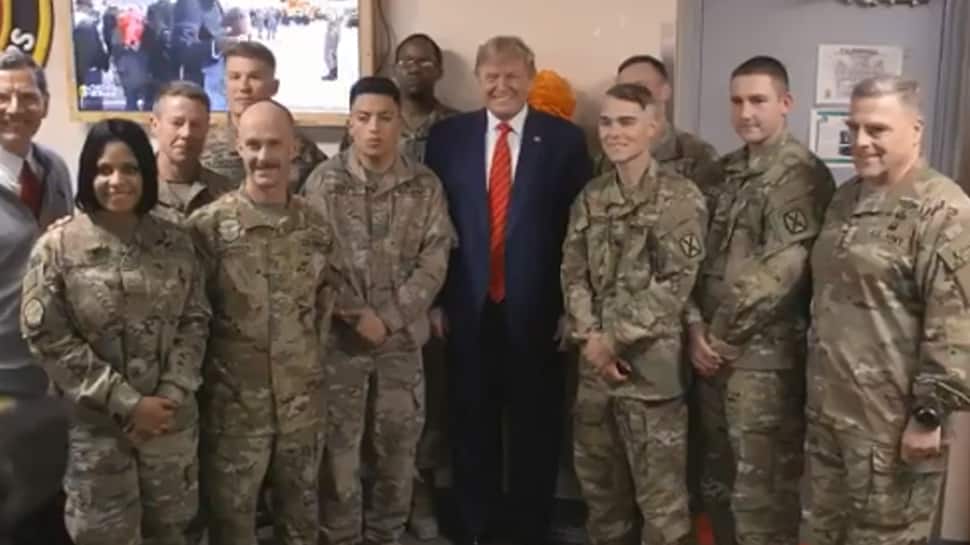 Bagram: US President Donald Trump made a surprise visit to Afghanistan on Thursday evening and met American troops stationed here and gave his Thanksgiving greetings to them before sitting down with his Afghan counterpart Ashraf Ghani for a bilateral meeting. During the meet, Trump said that he has revived the peace talks with the Taliban, which came less than three months after the US President dramatically halted negotiations with the group.

"The Taliban wants to make a deal, and we`re meeting with them," Trump was quoted by the New York Times as saying with Ghani by his side."We are going to stay until such time as we have a deal, or we have total victory, and they want to make a deal very badly," he said while reiterating his decision to reduce the presence of US troops in Afghanistan to 8,600 from the current 12,000-13,000.

Trump made his first impromptu visit to Afghanistan, arriving in a darkened jet from Florida after 8:30 pm (local time). He carried out the tradition of feeding turkey and mashed potatoes to the US troops stationed at the Bagram airbase and mingled with them. The US President also posed for photographs with the servicemen and delivered his remarks in front of several hundred US soldiers at an aircraft hangar, celebrating Washington`s military achievements.

The Taliban also released 10 Afghan soldiers earlier this week. The two professors, as part of a prisoner swap deal between the group and the Afghan government under which the latter released three terrorists, including Anas Haqqani, from Bagram prison. The exchange of prisoners took place even as there was fresh hope of revival of the peace talks after Trump in September abruptly ended the talks with the Taliban citing continued attacks by the terror group.

Later, Ghani joined Trump onstage for his remarks and delivered an almost campaign-style speech, where he lauded Trump as "the architect" of a strategy for "wiping out Al-Qaeda" in Afghanistan and for the killing of ISIS leader Abu Bakr al-Baghdadi. Apart from cancelling the negotiations, Trump had also scrapped a planned "secret meeting" with the Taliban representatives at Camp David. The US had been negotiating with the Taliban in the last few months at Doha despite the group`s reluctance to hold direct talks with the Afghan government, which it views as a US puppet.