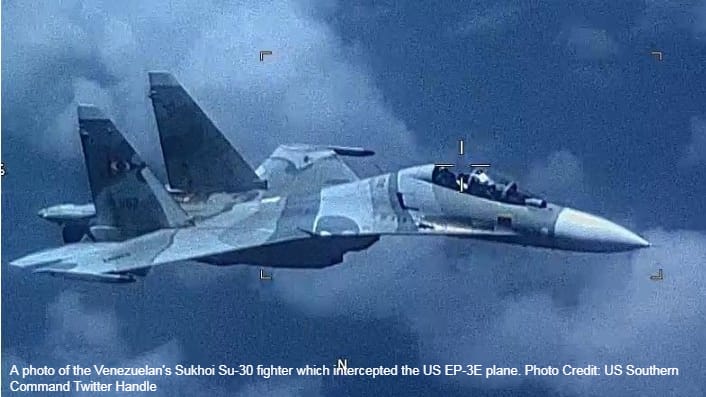 A Venezuelan Air Force Sukhoi Su-30 fighter intercepted a Lockheed EP-3E signals reconnaissance aircraft of the United States of America on Saturday with the latter accusing the South American nation's jet of aggressive manoeuvers. According to Venezuela's armed forces, the US EP-3 aircraft was detected nearing its airspace on July 19 which resulted in a Su-30 fighter taking off to identify the plane.

"The Armed Forces said that at 9:52 am (13:52 GMT), on July 19, 2019, the air force’s command detected a plane that was heading from the northwestern part of the Caribbean Sea for Maiquetia (near Caracas). There was an order to send interceptors in order to identify the aircraft”, the ministry said in a statement on Saturday. At 11:33 am the visual contact showed that it was a US EP-3E plane. The attempts to establish contact with it were not successful. The plane changed the flight route, it had been shadowed until the moment it had left the region at 11:43 am," a statement by Venezuela said.

According to the US, the EP-3E was in the region on a multi-nationally approved mission in the international airspace over the Caribbean Sea when the Venezuelan Su-30 fighter started to follow the plane and also endangered its crew by its manoeuvres. The video posted by US Southern Command was 16 seconds long.

The US also blamed Russia for supporting Venezuelan President Nicolas Maduro, who is considered to be a dictator by the US. Venezuela has been politically volatile for the last several months with Maduro and US-supported opposition leader Juan Guaido involved in a power struggle. Maduro's allies include Russia, China and Cuba.

Now, Iran at loggerheads with UK over seizure of oil tanker in Strait of Hormuz