Scheduled airlines will begin operating 21,941 domestic flights each week on domestic routes on October 30 as part of the winter schedule. There will be 1.55 percent fewer weekly flights than the 22,287 flights that were run during the last winter schedule. From October 30, 2022, through March 25, 2023, the winter schedule will be in force. There will be 21,941 weekly departures in the forthcoming Winter Schedule 2022 from 105 airports. It is to be noted that this is the second consecutive year that DGCA has reduced the number of flights allowed to operate in India.

In comparison to the winter schedule of the year prior to the pandemic, 2019–20, which had 23,307 departures, the winter schedule of 2022 experienced a 4.4 percent decrease in departures last year. "Out of these 105 airports Deoghar, Shimla, and Rourkela are the new airports proposed by the scheduled airlines," aviation regulator DGCA said in a release on Friday. Out of the total 21,941 departures, the maximum will be by IndiGo at 10,085 followed by SpiceJet at 3,193. 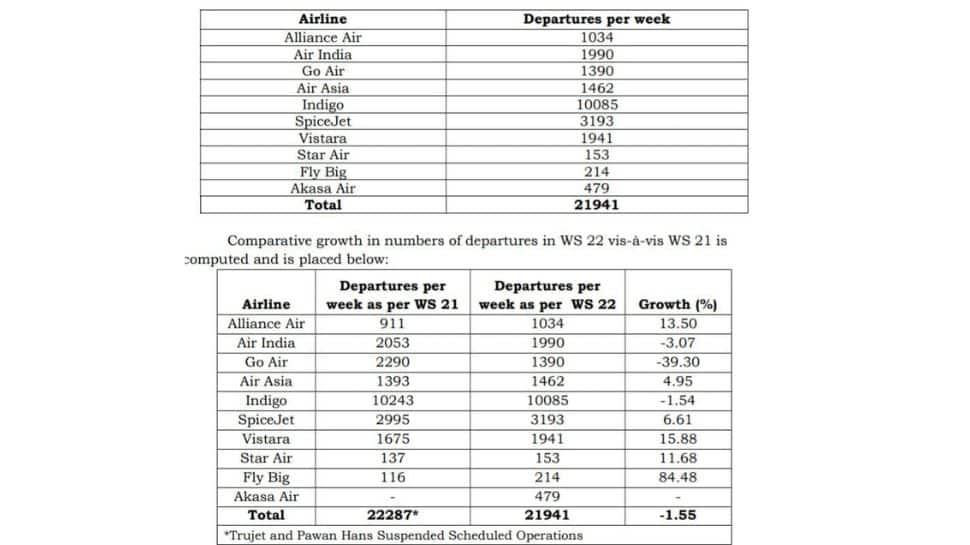 The number of departures for Fly Big has increased significantly showing a growth of 84.88 percent. Similarly, other airlines like Vistara, Alliance Air, and Star Air also showed growth in flight numbers by 15.88 percent, 13.50 percent, and 11.68 percent respectively.

GoFirst has experienced the largest decrease in the number of flights it will operate; instead of operating 2,290 flights per week during the winter of 2022, GoFirst will now only operate 1,390 flights per week. While other airlines like Air India and Indigo joined Go Air with a drop of 3.07 percent and  1.54 percent respectively.  The other airlines like SpiceJet and AirAsia showed marginal growth of 6.61 percent and 4.95 percent respectively.