The World No. 25 Indian, who went into the match with a 0-2 head-to-head record, saw off three-time Olympic silver medallist Lee 21-10 21-18 in a 40-minute men's singles contest at the Jakarta Convention Center (JCC). 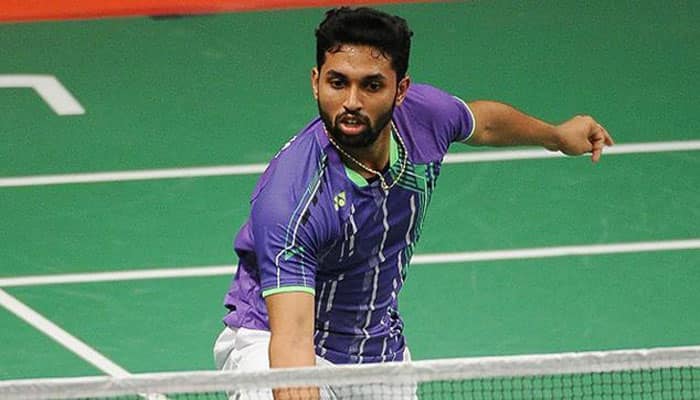 The World No. 25 Indian, who went into the match with a 0-2 head-to-head record, saw off three-time Olympic silver medallist Lee 21-10 21-18 in a 40-minute men's singles contest at the Jakarta Convention Center (JCC).

"Lee looked ordinary today and I took my chances. I am very happy to have won," Prannoy told PTI.

K Srikanth also dug deep into his reservoir to notch up a stunning 21-15 20-22 21-16 victory over fourth seed Denmark's Jan O Jorgensen to make the quarters too.

"Tough match today but happy to be on the winning side," said Srikanth after the match.

Prannoy will next face Olympic champion Chen Long of China, while Srikanth will meet the winner of the match between Chinese Taipei's Tzu Wei Wang and Hong Kong's Ng Ka Long Angus.

Prannoy looked in ominous form as he opened up a 6-0 lead in the opening game and then jumped up to a 10-3 advantage. After the break, the Indian continued to move ahead to eventually pocket the game without much ado.

In the second game, Prannoy once again held a 10-6 lead, which was quickly erased by Lee, who had a 13-12 advantage for a brief time.

Prannoy soon changed gears to surge to 17-14 but Lee again levelled the scores before the Indian shut the door with some good points to foil the top seed's chance of clinching his record 7th Indonesian title.

World No. 22 Srikanth, however, had to toil hard to get across Jorgensen, ranked 9th.

The 24-year-old from Guntur had beaten Jorgensen in straight games during their last meeting at the Rio Olympics and he once again had the last laugh in the 57-minute hard- fought battle.

The opening game was fought tooth and nail by both the players as they moved neck and neck till 10-10. After that, Srikanth slowly moved away and reeled off four straight points at 17-15 to grab the game.

In the second game, the duo was engaged in a fierce fight as none gave an edge. After being locked at 11-11, Jorgensen moved to a 15-12 lead but Srikanth kept fighting till the end to claw back at 20-20.

However, Jorgensen managed to earn the two points to stay afloat in the competition.

In the decider, Jogensen zoomed to a 5-0 advantage but Srikanth showed tremendous grit in the face of adversity to turned the tables with six straight points before slowly distancing himself from the Dane.

In the end, Jorgensen couldn't bridge the gap even as Srikanth celebrated.