After woman accuses Zomato delivery boy of assault, latter alleges 'she hit her nose with her own ring'

The Zomato delivery executive claimed to have pleaded to her for paying the bill but the woman called him a 'slave'. After which, the Zomato support told the guy that the order has been cancelled, but the woman refused to give back the food. 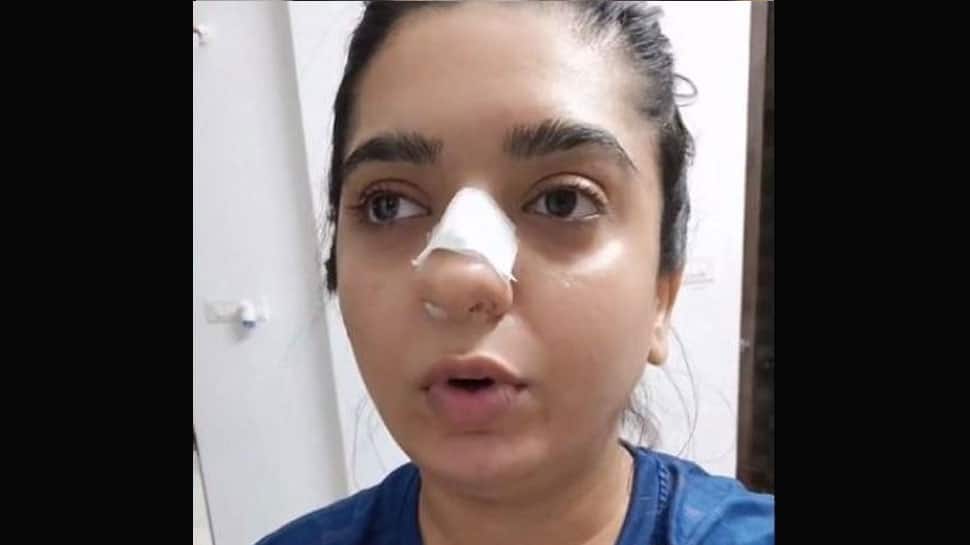 New Delhi: A day after a Bengaluru woman named Hitesha Chandranee accused the Zomato delivery executive of assaulting her which left her nose bleeding in a video, the person in question has denied all her claims.

In an interview with The News Minute, the delivery person named Kamaraj, who has been suspended by the company after the complaint, said, "After I reached her apartment door, I handed her the food and I was expecting her to pay me (as she had opted for cash on delivery mode of payment). I also apologised since the delivery was delayed due to traffic and bad roads. But she was very rude from the outset. She asked me ‘Why are you late?’ I replied apologetically, as there were road blocks due to ongoing civic works and there were traffic jams as well.  But she kept on insisting that the order has to be delivered within 45-50 minutes. I am working on this job for more than two years and this is the first time that I have had to go through this kind of an ordeal."

He added that the woman refused to pay after accepting the order and said that she is talking to Zomato chat support.

The delivery executive claimed to have pleaded to her for paying the bill but the woman called him a 'slave'. After which, the Zomato support told the guy that the order has been cancelled, but the woman refused to give back the food.

"At this point, when I was walking towards the lift, she started using expletives in Hindi. She suddenly threw slippers at me and started hitting me. For my safety, when she was hitting me, I tried to use my hand to shield her blows. When she was trying to push my hand away, she accidentally hit herself with her finger ring on the nose, which led to the bleeding. Anybody who sees her face, will understand that this wouldn't be created by a punch. And I don’t wear any rings."

Kamaraj added, "the Zomato support system person in Delhi also supported me and offered me empathy after I narrated the ordeal that I had to go through. The problem is there is no CCTV footage to prove my innocence."

According to Joshi Srinath Bengaluru DCP (South East), the delivery man, Kamaraj, was arrested shortly after the makeup artist Hitesha Chandranee aired her woes and tagged the city police, who asked her to provide the area details to assist her further. She narrated the incident on her social media handles on Tuesday, where she can be seen with a bloody injury on her nose, reported ANI.

Meanwhile, the woman alleged in her video, "he (delivery boy) shouted at me - 'I am your slave or what, you are asking me to wait'. I got scared so I tried to shut the door but he pushed the door and snatched the order from my table. He entered my house. Then he punched me and ran away."

She added, "It seems that after an X-Ray, the bone is broken, so surgery is needed for the same." She also thanked the Karnataka Police for taking care of her concern promptly. Zomato soon responded to the incident through social media, apologising for the same and informed that the delivery partner had been delisted from the platform.

In an official statement, Zomato said, "We deeply regret this incident and apologise to Hitesha for this traumatic experience. We are in touch with her and are providing our complete support through the necessary medical care and investigation. Meanwhile, we have delisted the delivery partner from our platform."

Digital artwork sold for a whopping $70 million at Christie's