While Mustafizur Rahman is expected to be included in Bangladesh's World Cup squad, he is most likely to miss the initial stages of a pre-tournament training camp. 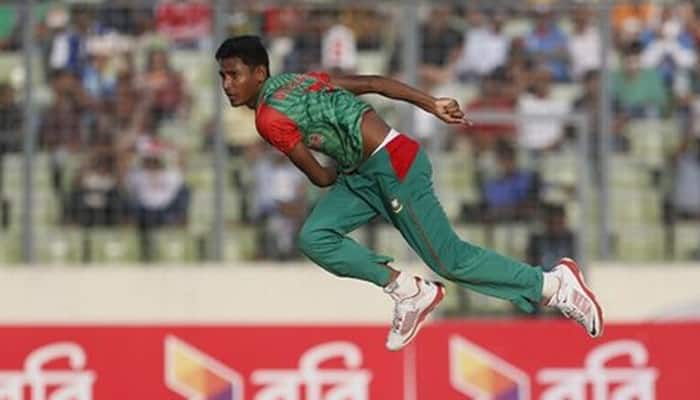 In a setback for Bangladesh ahead of the International Cricket Council (ICC) World Cup, fast bowler Mustafizur Rahman could be sidelined for at least two weeks after recently suffering an injury on his left ankle during a training session.

While the 23-year-old young star is expected to be included in Bangladesh's World Cup squad, he is most likely to miss the initial stages of a pre-tournament training camp.

Reflecting on Rahman's injury, Bangladesh Cricket Board chief physician Dr Debashish Chowdhury said that though there is no fracture-related injury on his ankle, he has some pain in the ligament and, therefore, the pacer would be rested partially.

“There is no fracture-related injury [but] there is some pain in the ligament, a lateral ankle sprain. He had suffered this kind of sprain before but predictions regarding these injuries are difficult. He will rest partially with little exercise in between and his condition will be reassessed two weeks from now," the ICC quoted Chowdhury as saying in the Dailystar.

Rahman has now joined a long list of his injury-hit Bangladesh team-mates ahead of the ICC World Cup.

While Mushfiqur Rahim is still recovering from a broken rib-cage which he suffered in the Asia Cup, Mahmudullah has aggravated a shoulder injury while diving on the field during series against New Zealand.

Bangladesh will continue their World Cup preparation when they head into the tri-nation ODI series, featuring Bangladesh and West Indies, from May 5. They will then begin their campaign at the mega event against South Africa on June 2.