Virat Kohli has gained one slot in ICC T20I rankings and a massive 47 rating points after unbeaten knocks of 73 and 77 in the second and third T20I respectively against England. 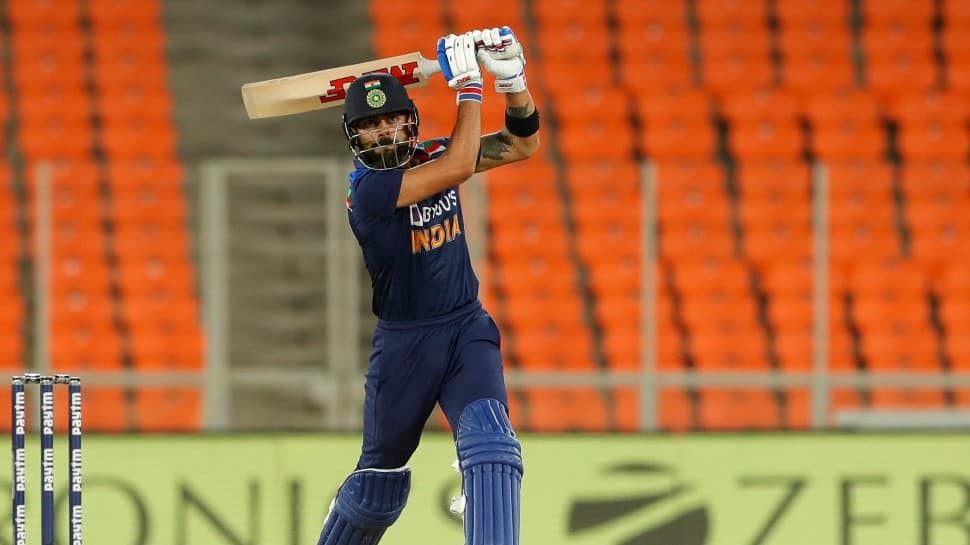 India skipper Virat Kohli, who smashed unbeaten 77 in the third T20I against England on Tuesday, has moved back into the top five while England star batsman Jos Buttler has re-entered the top 20 in the latest ICC men's T20I rankings after blistering performances in their ongoing five-match series in Ahmedabad.

Kohli, a formerly top-ranked batsman in the format and currently number one in ODIs, has gained one slot and a massive 47 rating points after unbeaten knocks of 73 and 77 in the second and third T20I respectively. The India skipper is at the fifth spot and that has made him the only batsman to be placed in the top-5 across all three formats.

Back-to-back fifties in the ongoing #INDvENG series have helped Virat Kohli reclaim the No.5 spot in the @MRFWorldwide ICC T20I Player Rankings

Meanwhile, Buttler's match-winning 83 not out in the third match has helped him advance five places to the 19th position, just two shy of his career-best 17th position attained in October 2018.

Shreyas Iyer (up 32 places to 31st) and Rishabh Pant (up 30 places to 80th) have gained among batsmen while all-rounder Washington Sundar (up two places to 11th) and seam bowlers Shardul Thakur (up 14 places to 27th) and Bhuvneshwar Kumar (up seven places to 45th) have moved up the list for bowlers.

For England, Jonny Bairstow, who chipped in with 40 runs and was associated in an unbroken 77-run stand with Buttler in the eight-wicket win on Tuesday, has moved up two slots to 14th position in the list led by his compatriot Dawid Malan. Jason Roy has advanced four slots to 24th with scores of 49 and 46 in the first two matches.

Fast bowlers Jofra Archer (up 43 places to 34th) and Mark Wood (up 59 places to 39th), as well as left-arm seam bowler Sam Curran (up 41 places to 74th) have gained in the weekly update for men, carried out on Wednesdays.

In the men's ODI rankings, wicketkeeper-batsman Shai Hope's Player of the Series effort against Sri Lanka, in which he had scores of 110, 84 and 64, has helped him gain five slots and reach joint-seventh position, three off his career-best fourth position attained in May 2019.

Nicholas Pooran (up one place to 32nd), Evin Lewis (up 10 places to 44th) and Darren Bravo (up eight places to 99th) are the other West Indies players to move up in the batting list after their team won the ICC Men's Cricket World Cup Super League series 3-0. Fast bowler Alzarri Joseph's four wickets see him advance seven places to a career-best 27th position.

For Sri Lanka, Danushka Gunathilaka has gained 20 slots to reach 51st position after scoring 187 runs in the series while PWH de Silva (up from 94th to 66th) and Lakshan Sandakan (up from 124th to 99th) are among those to move up the bowlers' list.

In the men's Test Rankings, Hashmatullah Shahidi has entered the top 100 after notching up Afghanistan's first Test double century, which helped his team beat Zimbabwe by six wickets to level the two-match series 1-1. He has rocketed 47 places to 90th position.