Rain first made an appearance in the afternoon after the 17th over of the Afghanistan innings. The players from both sides had to rush off the field. However, the interruption didn’t last too long.

India vs New Zealand: Team India’s second official warm up game against New Zealand at the Gabba in Brisbane on Wednesday (October 19). It will be the second game of the day at the Gabba with Afghanistan taking on Pakistan in the first match earlier in the day. However, to the disappointment of the fans, the India vs New Zealand warm up may be interrupted by rain in the afternoon and evening.

Rain first made an appearance in the afternoon after the 17th over of the Afghanistan innings. The players from both sides had to rush off the field. However, the interruption didn’t last too long in the game as teams were back on within 10 minutes with covers almost instantly going off.

The weather prediction for the Gabba in Brisbane is Cloudy. There is very high (near 100%) chance of showers, most likely in the afternoon and evening. Winds northeasterly 15 to 20 km/h becoming light in the late evening, according to the MET department. 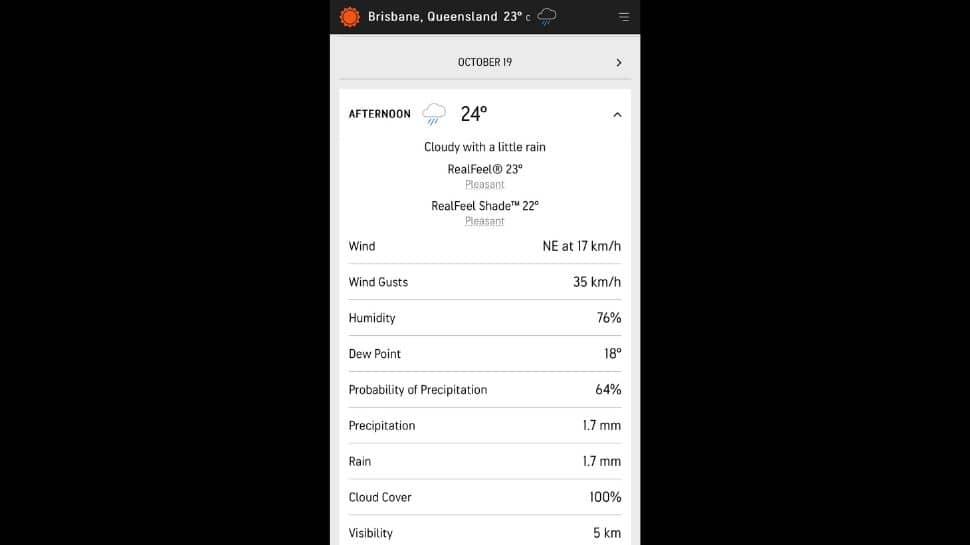 There is no additional time marked out for the ICC T20 World Cup 2022 warm up matches. So any rain interruption will result in immediate deduction of overs if players are off the field for any length of time.

Rohit Sharma’s Team India will open their T20 World Cup 2022 campaign against arch-rivals Pakistan at the Melbourne Cricket Ground (MCG) on Sunday (October 23). Even the India vs Pakistan encounter is expected to be affected by rain.

It’s been raining in and around Melbourne past few days. According to Melbourne Weather Forecast, Rain is predicted both in the morning and evening in the state. If the game gets washed out there is no reserved day for the match and thus both teams will split the points.

Meanwhile, the India and Pakistan has been sold out as over 500,000 fans have already booked their place to attend the showpiece event in Australia, starting October 16. The clash between the arch-rivals, scheduled at the MCG on October 23, is sold out, “with additional standing room tickets snapped up within minutes of going on sale.”