Having reduced South Africa to 138 for eight on the third day of the final Test, Shahbaz Nadeem bagged the remaining two wickets to help India seal a crushing win by an innings and 202 runs and complete a 3-0 series whitewash in Ranchi on Tuesday. 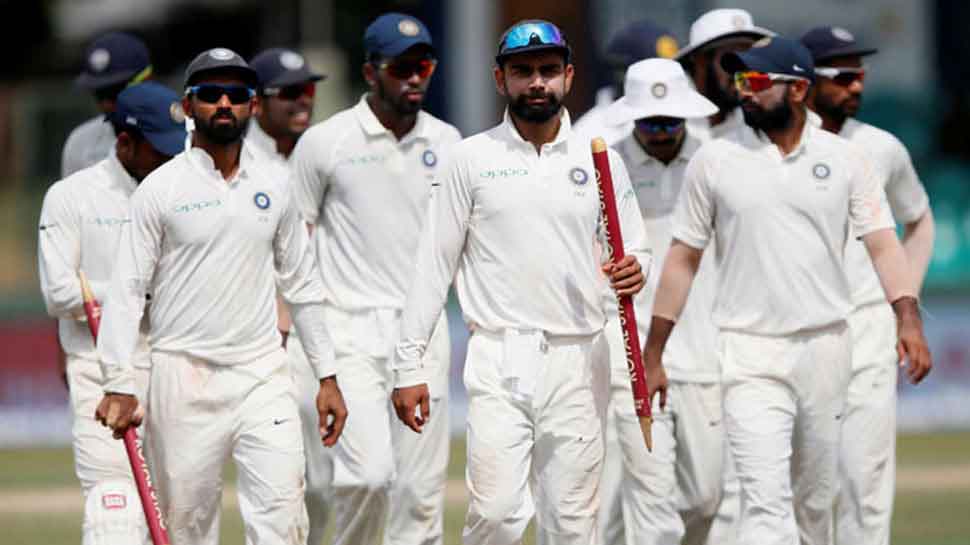 Having reduced South Africa to 138 for eight on the third day of the final Test, Shahbaz Nadeem bagged the remaining two wickets to help India seal a crushing win by an innings and 202 runs against the Faf du Plessis-led side and complete a 3-0 series whitewash at JSCA International Stadium Complex  in Ranchi on Tuesday.

# India thrashed South Africa by an innings and 202 runs!

# WICKET!! It's two wickets in two balls for Nadeem. Lungi Ngidi was the last batsman to come to bat for South Africa and he ended up handing a return catch to Nadeem. South Africa 133 (48 overs)

# WICKET! De Bruyn looked to cut on the fifth delivery of the 48th over by Shahbaz Nadeem, but ended up handing a catch to wicketkeeper-batsman Wriddhiman Saha behind the stumps to depart for 30. South Africa 133/9 (47.5 overs)

# Mohammed Shami to open the proceedings for India today!

# The fourth day's play is all set to begin!

On Sunday, Mohammad Shami and Umesh Yadav tore apart South Africa’s batting line-up to reduce them to 132 for eight in their second innings after enforcing follow-on on the third day of the final Test.

While Shami picked up three wickets for the hosts, Yadav bagged two wickets. Ravindra Jadeja and Ravichandran Ashwin also chipped in with a wicket each.

At stumps, Dean Elgar's concussion substitute Theunis de Bruyn and Anrich Nortje were batting at the crease at their respective scores of 30 and five, with South Africa still trailing by 203 runs.

Earlier, India declared their first innings at 497 for nine before bundling out South Africa cheaply for 162 and enforcing follow-on.

Earlier, the Virat Kohli-led side clinched the Test series against South Africa with a game to spare when they registered a crushing win by an innings and 137 runs in the second Test at the Maharashtra Cricket Association Stadium in Pune. The hosts had also dominated South Africa in the all three aspects of the game in the opening Test as well, registering a comfortable 203-run win in Visakhapatnam.